Bonington, Sunset in the Pays de Caux, 1828, watercolour. Wallace Collection, London. Image source: WGA
Delacroix praised his long dead friend Bonington’s “astonishing ability”, “that  lightness of touch which, especially in watercolors, makes his works a type of diamond which flatters and ravishes the eye, independently of any subject and any imitation.” [1]

Richard Parkes Bonington has been called “the Keats of painting” – if only it were that simple, we could wrap this up now in relief. Yet another marvellous boy, his vivid output and early, painful death of tuberculosis aged 25 resemble Keats’ own art and life. There’s poetry in Bonington’s brushwork, the liquid freshness of colours, the delight in shadow and light. His technical genius was in hiding technique, so that with him all the spontaneity for which other Romantics strove looks effortless. His pictures are more than just pretty; he was a painter’s painter, loved, as Delacroix said, by all who knew him.

The absence of perplexity and detail in his work is refreshing, but not Keatsian – not the mature Keats of Hyperion. His paintings are like pictures inside a Keats poem, impressions brightening up the dark walls of an Enchanted Castle, or the Chamber of Maiden-Thought in the “Mansion of Many Apartments”. [2] 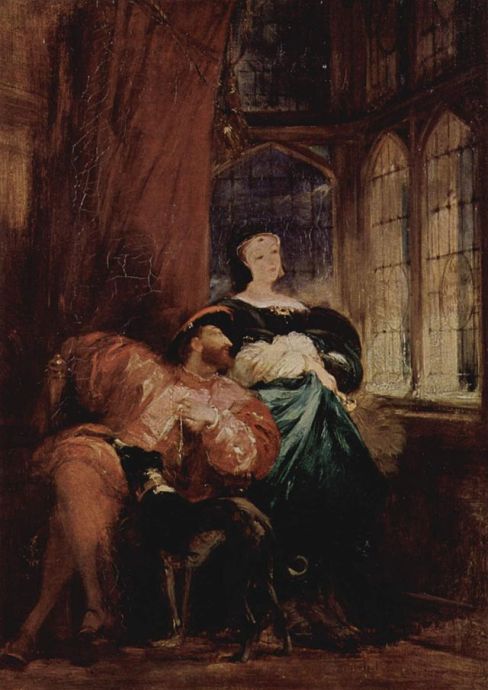 Keats wanted to anatomize the veins of a living hand as much as luxuriate in the ephemeral, drugged visions of “dreaming nights”. Keats the trained surgeon, Constable the amateur geologist, one a pantheist, the other Anglican, wanted to go beyond communion with nature through their senses to “Tell…how came I thus, how here?” as Milton’s Adam had. “We see nothing truly till we understand it”, Constable declared. “Painting is a science, and should be pursued as an inquiry into the laws of nature.”

Part Five of THE CHARACTER OF LIGHT

The poetry of art as defined by late eighteenth and early nineteenth century aesthetics exists in a range of styles and forms, so you see it in both Gainsborough’s lyricism and the showy drama of Thomas Lawrence’s portraits, where society men and women pose like Romantic poets and novelists.

Lawrence, social climber, keen play-goer and close friend of the national priestess of emotions, Sarah Siddons, created consciously theatrical portraits; to our eyes his way of lighting his celebrity sitters, usually from high above, and coaxing intimate expressions out of them, while blurring the background, is cinematic.

Thomas Lawrence, Marguerite, Countess of Blessington, 1822. Wallace Collection. Image source: Wikipedia. The glamour is not so much poetry as Hollywood – and undeniably enjoyable.

He was only interested in landscape as a backdrop to his staged portraits. For Constable, landscape was the drama, a changing story of wind, rain and sunshine across sky, fields, water, and trees, from where Keats tracked the nightingale, out of its habitat “Of beechen green, and shadows numberless” into the light of meadows and still streams. 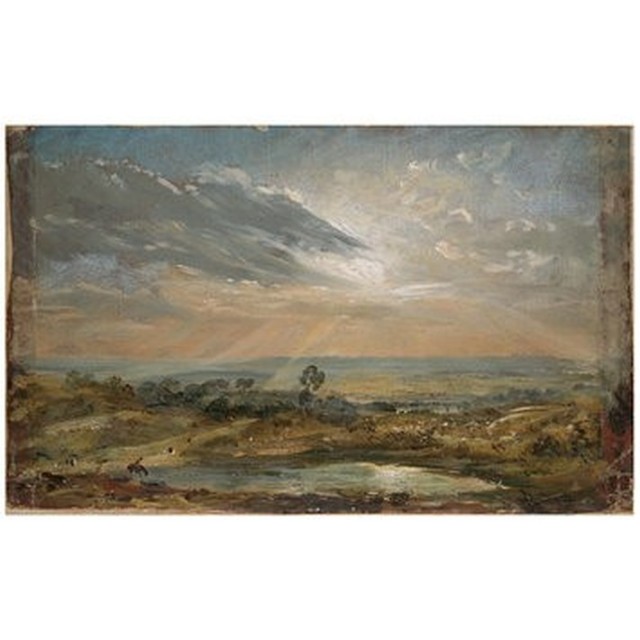 Constable, Branch Hill Pond, Hampstead, oil on canvas, ca.1821-22.
…thy plaintive anthem fades
Past the near meadows, over the still stream,
Up the hill-side; and now ’tis buried deep
In the next valley-glades… (Keats, Ode to a Nightingale)
Image: © Victoria and Albert Museum, London

Keats chose poetic forms to anatomize the veins of a living hand as well as luxuriate in the drugged visions of “dreaming nights”.[3] Keats was a trained doctor, Constable an amateur geologist; one a pantheist, the other Anglican, both wanted to go beyond communion with nature through their senses to “Tell…how came I thus, how here?” just as Milton’s Adam had a hundred and firty years earlier.[4] “We see nothing truly till we understand it”, Constable declared, during his ‘Course of Lectures on the History of Landscape Painting’ (1836), a professional’s guide to creating art through imagination and scientific study of nature, that resonates with Keatsian philosophy.

Constable’s art was in “selection and combination”[5] of nature’s forms and colours that he had spent his life studying; he did not paint “golden visions”[6] like Turner. In the Odes, and in Hyperion’s “lucent empire”, Keats does both; he observes and dreams. The pretty “spangly light” of Endymion evolved into Hyperion’s “calm luxuriance of blissful light”, the same diffuse reflections and refractions of Claude, Turner and the Impressionists.

Turner, Ancient Italy, Ovid Banished from Rome, 1838, oil on canvas. Private collection of The Athenaeum. Image source: Wikipedia
“Turner has done some golden visions, glorious and beautiful; they are only visions, but still they are art, and one could live and die with such pictures.” John Constable, Letter to Fisher, June 11th, 1829

We experience Keats’ “high requiem” of nature, finding “a path /Through the sad heart” of humanity, again, in Palmer’s visionary pastorals, whether lit by sun or full moon, of the mid 1820s to mid 1830s.

Samuel Palmer, In a Shoreham Garden, watercolour ca. 1830 © Victoria and Albert Museum, London.
The poetic soul painted in words:
“I cannot see what flowers are at my feet,
Nor what soft incense hangs upon the boughs,
But, in embalmèd darkness, guess each sweet
Wherewith the seasonable month endows”
Keats, Ode to a Nightingale

We are soothed, consoled, edified – but these are only visions. Consciousness of hard facts and calamitous events in the recent historical past of social, political and industrial revolution, and of twenty-three years of almost continuous war, deifies the young Apollo in Hyperion:

Delacroix, Apollo Slays Python, 1850-51. Musée du Louvre, Paris. Image source: WGA
“A picture must first reproduce the intimate thought of the artist, which dominates the model, as the creator does creation.” [7]

These were the themes of Delacroix, the foremost exponent of French Romanticism, extolled by Baudelaire “as a poet in painting”. His turbulent compositions of political, social and mythological dramas were informed with his own spirit and temperament. Like Byron, who turned the poet into a hero, a counterpart to Napoleonic genius, a celebrity in his own right, he was a confident self-publicist whose concept of the artistic personality was divergent from Keats’ Negative Capabilty.

The approach was different, but the goal was the same, like actors choosing how much of their own personalities to use or submerge in characterization that will best suspend audiences’ disbelief. Some artists are more comfortable wearing masks than others. Keats’ own theory wavered between loss and assertion of self-identity, never resolved to his satisfaction.

Delacroix’s colour technique was directly influenced by Constable. In England, a painting of a horse-drawn cart crossing a river in Suffolk that became synonymous with safe, boring, middle-class art caused a revolution in France when it was exhibited at the Paris Salon in 1824. Nothing would be seen in the same way ever again. The revelation of broken colour, verisimilitude to nature and personal emotional response to the subject matter in The Haywain, as intense as a Keatsian ode to birdsong or a moss’d cottage tree, helped determine the course of French landscape painting in the 19th century.

Totally different in their choice of subject matter, Delacroix and Constable were alike in their methods and theories, innovators with a profound respect for old masters, inspired by other artists but never imitating them, combining feeling with craftsmanship. On the chain of art, Delacroix paid special homage to the prodigious dramatists Michelangelo and Rubens. Baudelaire identified Delacroix  as ” the last of the great artists of the Renaissance and the first modern”.

Among other English painters, Delacroix admired Gainsborough and Lawrence, the history paintings of David Wilkie and the landscapes, especially the watercolours, of his close friend, the Anglo-French Bonington. For themes of political liberty, and violence, Byron was one of his main literary inspirations. The anti-heroic Corsair and “the blood and chains” of Sardanapalus were easily adapted into larger than life epics. The delicate metaphysics and intimate settings of Keats’ transcendental poems were irrelevant to Delacroix’s art, but they are connected as colourists and theorists of the creative process. Keats in private shared many of the liberal politics of Shelley and Byron, but seldom put them into his compositions. His late attempt at satirical drama, The Cap and Bells, is embarrassingly simplistic.

When Keats turned to writing a classical epic, a struggle of power based around the Titans, it was the only one of his poems for which Byron had unqualified praise: “His Hyperion is a fine monument & will keep his name.” [8]

Unfortunately for Keats’ peace of mind, he was too thorough an intellectual not to realize that his worship of beauty as a thing of joy forever was compromised if his writing did not acknowledge the impact of modern social realities on individual development. “O brightest! though too late for antique vows….” The musical counterpoint in the Odes is so subtle that it’s easy to miss the ironic tone. More bitter than wistful, the poet mocks himself as “the pale-mouth’d prophet dreaming”. [9]

Responding to self-criticism, he turns the character of the too-feeling man into a doomed warrior, a companion to the death-pale knights enthralled to La Belle Dame sans Merci, who deliberately embraces Melancholy so he may continue to experience “aching Pleasure” to the full: “His soul shall taste the sadness of her might/ And be among her cloudy trophies hung”. [10] This would suffice as a poetic fancy, a self-indulgent glorification of mood extremes, articulated by a triumphant, orotund series of vowel sounds and the agreeably sinister picture of the innermost dark spaces of melancholy – nothing could look more seductively Romantic than Melancholy’s line-up of Twilight Byronic trophy heroes. But Keats isn’t self-indulgent. He has left us a sensible prescription for coping with depressive episodes. The notion of embracing psychological depression rather than brooding and being afraid of it is a popular tool for self-treatment nowadays.

Turner, The Cave of Despair (?), c.1835, oil on mahogany, Tate Gallery © Tate, London 2014. One of Turner’s most mysterious and disturbing visions, identified as an illustration to passages in Spenser’s Faery Queen because of the dominant presence of an owl, discernible from its shining eyes among cloudy, desperately gesticulating figures

In Lamia, one of Keats’ last poems, Apollonius, embodying the power of fact and joyless intellect, and Lamia, the power of sexuality and shape-shifting imagination, are presented as ambivalent characters, equally destructive to the individual (Lycius) they manipulate. Facts leak into Keats’ waking visions.

As Apollo finds, like an electric shock to his brain, the philosophical poet reaching out for a vision of the sublime must, sooner or later, confront political, economic and military power, the power of money and industry, as well as the power of their own imagination.