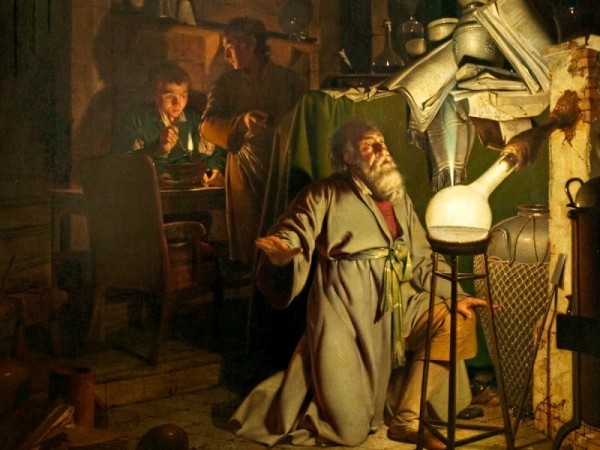 When Keats drew analogies between the poet and “some watcher of the skies”,[5] he was reflecting a wider contemporary debate about philosophical and scientific methods to ameliorate the human condition. His own thoughts occupied the boundaries of mysticism and science, and the arcane has always held fascination for youth. Like other great fantasy writers, Keats informed his fictions with scientific fact.

In May, 1817, at the same time that Keats began writing the gushing Endymion, his early embrace of poetics, all charm and no bite compared to his later work, another young writer, Mary Shelley,  two years his junior, was completing her first novel, Frankenstein.

An interest in both astrology and astronomy was not yet incompatible; a hundred years earlier, Newton, allegedly, had studied the occult; a hundred years later, Conan Doyle, a trained doctor, saw fairies.

Joseph Wright scrutinized the Industrial Revolution in the second half of the 18th century with more scientific curiosity and practical grasp of modernity than any other contemporary artist. Yet, deliberately, he used candlelight to imbue his realistic depictions of experiments and mechanization with mystical solemnity.

He gave alchemy the same reverent treatment as he gave chemistry, demonstrating the historical links and suggesting that the two processes were not as far apart as contemporary rationalists claimed. Wright chose to portray the alchemist like a Christian saint rather than a wacky wizard. Reason alone, it seems, cannot explain the universe.

Wright’s history painting at the height of the rational Enlightenment acknowledges the intuitions and prescience of universal meaning, “all that information (primitive sense)”, [6] that Keats believed necessary for poetry.

The heavens are not mere starry set decoration for the gods in Keats’ poems; there are detailed journeys through the galaxy in Endymion and in Hyperion, where he describes “the glancing spheres, / Circles, and arcs, and broad-belting colure” as if infinity is as close within his grasp as the orrery in Wright’s painting.

A philosopher with Newtonian gravitas demonstrates a clockwork model of the solar system to spell-bound children, avid for knowledge, their faces glowing in the light of the artificial sun. 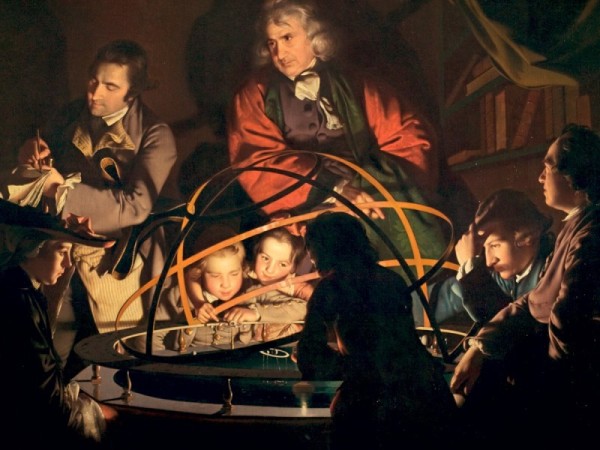 Joseph Wright, A Philosopher Giving that Lecture on the Orrery,
in which a Lamp is put in the Place of the Sun
oil on canvas, exhibited 1766. Joseph Wright Gallery, Derby Museum.
Image source: © 2014 Derby Museums Trust.
‘…a poet is a sage;
‘A humanist, physician to all men. (Keats, The Fall of Hyperion)

Joseph Wright embodied two of the predominant forces of the 18th century, the Enlightenment and the private enterprise of the rising middle class. Businesslike in promoting his own career, he brought imaginative power and spirituality to his history paintings, and insight into the economic, intellectual and industrial conditions that sparked the Romantic reaction to the Age of Reason and its botched revolutions.

Contact between feeling and reason sparks the radiant horror of Apollo’s total deification in Hyperion. The poet must confront recent and ancient historical facts:

“Knowledge enormous makes a god of me,
“Names, deeds, gray legends, dire events, rebellions,
“Majesties, sovran voices, agonies,
“Creations and destroyings, all at once
” Pour into the wide hollows of my brain,
…………………………………………
Soon wild commotions shook him…
Most like the struggle at the gate of death…

There is a shocking reality about Apollo’s anguish during this transmutation. The physical details are precise. Keats, who had nursed his mother and brother and witnessed death throes, was fascinated, like all his literary generation, by galvanism. Apollo appears to suffer electro-convulsions as knowledge is charged into his brain.

The “wild commotions”, so beloved of Romantic poets and painters, that shake the god’s beautiful limbs, shake the neoclassical frame of the poem. By making Apollo omniscient, Keats had invoked the egotistical writer-creator of the Romantics that he opposed, the antithesis of his belief that art should be created by losing self-identity in the subject. He could not resolve either Hyperion to his satisfaction in the epic form he had chosen. [7].

By abandoning the poem, he unintentionally created a stupendous literary cliff-hanger that suits our modern taste for ambivalence: after “Apollo shriek’d; and lo! from all his limbs / Celestial” there is nothing.

The image we are left with is one we are more familiar with in art than literature: Michelangelo’s “Slaves” in stages of being born, a golden vision by Turner, or the adventures in colour of 20th century Abstract Expressionists to reconcile personal emotion and objectivity. 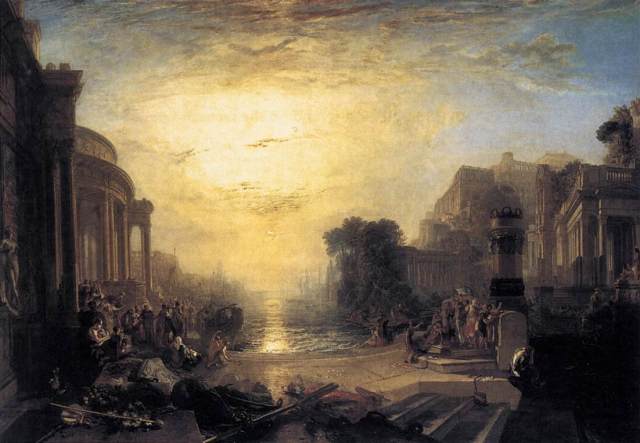 Turner, The Decline of the Carthaginian Empire, 1817.  Oil on canvas, 170 x 239 cm
Tate Gallery, London. Image source: WGA
In this effulgent interpretation of economic downfall, the bustle and architectural elegance of the seaport are eclipsed by Turner’s golden vision of the setting sun. The composition is in admiring imitation of two early works by Claude, Seaport at Sunset (1639) and Seaport with the Embarkation of St Ursula (1648). The imaginary classical buildings are in the same style as Cupid’s Palace in a later, more melancholy painting by Claude, of a secluded setting in a sombre evening light, adapted by Keats into ‘The Enchanted Castle’.

The effects that Keats wanted to achieve through original and authentic poetry are more usually painted and, nowadays, filmed, than written.  The immediacy of

no longer requires an intuitive connection between author and reader, when, unweaving a rainbow, we are able to dispense with words and imagination, and see the hand coming towards us in an apparently three dimensional image or even touch it with the use of projection mapping. The pleasurable jolt we feel reading Keats’ “Touch has a memory” [8] has been replaced in modern culture by the detachment of holographic data storage.

Rossetti concluded that “the next Keats can only be a painter”.[9] As Keats matured, he tried to stretch the poetic form to its limits and experimented with different styles in which to contain his maturing philosophy. He questioned the aesthetic and soul-healing functions of poetry:

‘….sure not all
‘Those melodies sung into the world’s ear
‘Are useless: sure a poet is a sage;
‘A humanist, physician to all men. (The Fall of Hyperion)

His own happiness in beauty was perpetually sundered because he “saw too distinct into the core / Of an eternal fierce destruction”. [10] His ambition had been to create poetry that would help humanity in its thwarted struggle for happiness, something beyond sweet songs that would divert us for a moment, something of “material sublime” [11], a philosophy that would “benefit…the great world”. [12]

He put some of his ideas about the ephemeral nature of happiness into “careless verse” composed to cheer up a sick friend. Lucky John Hamilton Reynolds – the letter he got is a fantasy tale, a philosophical treatise, and a magic lantern.

For us, reading it is like seeing a film preview of the imagery of Keats’ mature poetry, most strikingly the Grecian Urn, Nightingale and Melancholy Odes, La Belle Dame Sans Merci, The Eve of St Agnes – their genesis is all there, flashing by – and their predominant landscape, his re-imagining of “Claude’s Enchanted Castle” [13], the place where art brings peace to passion and intellect uneasily cohabiting in the soul.

[1] Keats, ‘Epistle to John Hamilton Reynolds’, Letters.
[2] Keats, The Fall of Hyperion
[3] Keats, Letters
[4] Keats in conversation quoted by Charles Armitage Brown, The Life of John Keats. As a trained doctor, Keats recognized that he was coughing up arterial blood.
[5] On First Looking into Chapman’s Homer
[6] Letters
[7] Letters
[8] What can I do drive away, ‘Lines to Fanny’, in a letter to Fanny Brawne, 1819
[9] D.G. Rossetti in letter to William Morris, quoted by Stella Bottai, victorianweb.org, from G.H. Ford, Keats and the Victorians, London, 1944
[10] Epistle to Reynolds, 25 March, 1818, Letters
[11] ibid
[12]The Fall of Hyperion
[13] Epistle to Reynolds.

Special thanks to Derby Museums Trust for permission to use the images of Joseph Wright’s paintings in their collection. Highly recommended. Website: www.derbymuseums.org
Joseph Wright’s paintings are familiar, from internet sources and national exhibitions over the years, but it’s the museum in Derby, Wright’s home town, that owns and curates them superbly through the new Joseph Wright Institute. Please support Derby Museums’ great work as a registered charity in local history preservation, education and inspiration:
Follow: @derbymuseums;
Like: facebook.com/derbymuseums.

3 comments on “Into the core”