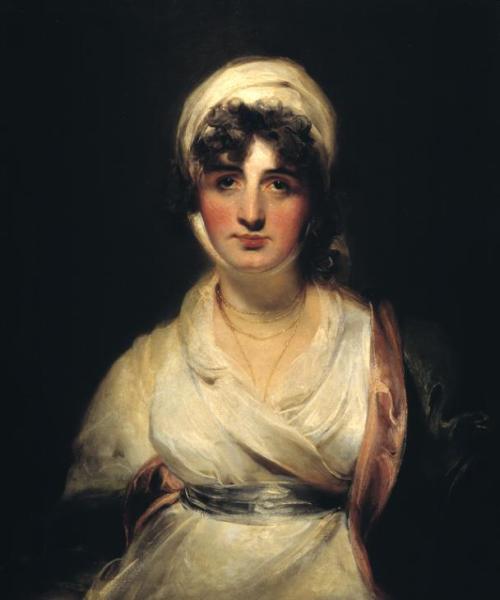 Mrs Siddons as Mrs Haller by Thomas Lawrence, 1796-8 oil on canvas
© Tate Gallery London.
The painting was bequeathed to the Tate in 1868 by Mrs Siddons youngest child, Cecilia.

PART FOUR – In Spite Of

Sarah Siddons had to bear the worst tragedy that can befall a mother, the death of a child, five times. Two of her children died in infancy, an expected mortality rate for the time, but she gave the impression that only pouring grief into acting enabled her to endure the losses of two grown up daughters, one of them aged nineteen, the other twenty-seven, and of her eldest son when he was forty. “I can at least upon the stage give a full vent to the heart which, in spite of my best endeavours, swells with its weight almost to bursting.” They were killed by lung disease, victims of a genetic predisposition, as strong in the Kembles as acting.

As a caring mother, Mrs Siddons’ instinct was to protect her daughters from the devil’s profession of acting; as an ambitious actress, to protect herself from competition. She and William Siddons were anxious to secure conventionally respectable lives for all their children.

Only Henry, the eldest, became an actor and theatre manager, and his mother did her best to stop him. She wanted him to be a clergyman. Of all the Kemble dynasty, he was the most tragic because he inherited the family passion and intellect for acting with little of the talent, and he knew it.

All he ever wanted to do from childhood was to be an actor like his mother. To make his life worse, he closely resembled her and was acutely sensitive to criticism. Like many actors’ children, he was in thrall to the profession, and, like an unrequited lover, entirely unsuited by temperament to withstand its constant rejections.

He was not weak; he was hard-working and dedicated. He published Practical Illustrations of Rhetorical Gesture and Action, a manual for miming the passions adapted from the definitive German work on the subject – Love, Pride, Grief, Tranquil Joy, Distraction and Persuasion, even Fashionable Impudence, each had their own posture.

His wife, Harriet Murray (1783 – 1844) was a popular actress, limited in her range to ladylike interpretations of Shakespeare’s romantic heroines. After she was widowed, with four children to provide for, she successfully took over the management of the Edinburgh theatre with the help of her brother.

Harriet was not really a good actress except in one part: herself. The gentle character that charmed everybody and secured her social position was, her niece by marriage Fanny Kemble wrote, “artificial”. She had learned to control her naturally passionate and impetuous temper and got her own way in life by adopting a deceptively “demure playfulness of manner”, a performance of femininity that could not have been further from her mother-in-law’s, under cover of which she was determined and independent.

Fanny Kemble, adept at effusively flattering her female relatives while skewering them in the same sentence, “worshipped” Harriet. Even better evidence of Harriet’s moral character and the sincerity of her love for Henry is that her formidable mother-in-law liked her unreservedly.

Mrs Siddons worried about all her children, but “poor, dear” Henry caused her the most grief in his life and death. She told her friend and future biographer Thomas Campbell, who was of the same generation as her three eldest children, that Henry “was the most unfortunate man in his choice of a profession, but the most judicious and happy in the choice of a wife.” His death was the hardest of all the blows she had to bear.

Outwardly, she endured bereavement with Christian resignation. In private, since retirement had deprived her of acting as an outlet, she turned to her sculpture for therapy. After Henry’s death she moulded a full-length clay figure of her youngest surviving child, Cecilia, now twenty, as if by making a representation she would preserve the living person from mortality.

The Siddons’ younger son, George, was a godson of the Prince Regent, and went into the Indian Civil Service, as far away from the stage as possible. The ruling and professional classes paid homage to Mrs Siddons because her acting and Shakespearean readings opened reserves of compassion they did not know they had; washed clean in their own tears, they felt morally justified. They were ennobled by the actress, but all she wanted for her children was that they join their ranks. 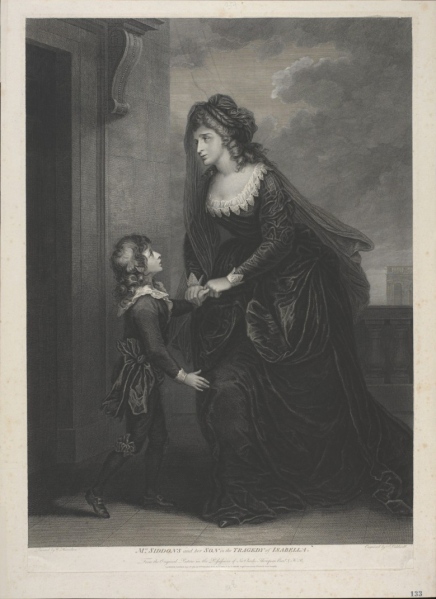 In the character of a tender mother, with her son Henry Siddons, the only one of her children to follow his parents into the acting profession, in ‘Isabella’ by Thomas Southerne. Engraving, June 1785, London by Caldwall of a painting by William Hamilton © Victoria and Albert Museum.

The girls were not brought up in expectation of having to work for a living. They were not ciphers or freeloaders. Their debilitating illnesses cut short any aspirations of the two elder girls and Mrs Siddons provided everything for them. All three girls were articulate, attractive, and strong-willed, raised in a cultured household, conversing with the leading writers, artists and actors of the day. The eldest, Sarah Martha, known to the family as Sally, was an accomplished songwriter.

The youngest, Cecilia, was brought up from the age of nine to be her mother’s companion and solace in retirement, a vestal sacrifice made without complaint or surrender of her individuality for nearly 30 years. Sarah Siddons was seen as worth it.

Mrs Siddons’ daughters were financially dependent on her, but not oppressed; their own personalities were given room to flourish. The highly intelligent eldest and youngest daughters observed an unwritten, unspoken contract in their relationship with their mother. They were protective of her career and creative needs as an actress, and sculptor, trying to make sure she was spared as much domestic upset as possible, which was difficult in such an emotional family.

Her daughters kept the great actress’s sacred flame burning. In many ways, she was dependent on them. 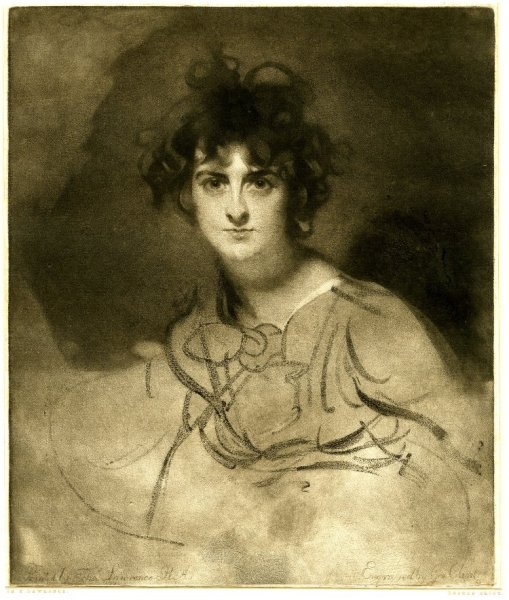 Portrait of Sarah Martha (Sally) Siddons after a drawing by Lawrence, print published 1830
© British Museum London
In other versions, the sitter has been identified as the younger sister, Maria, which seems less likely looking at the maturity of expression round the mouth and the long nose, so like their mother’s – all that is certain is that the individual identities of Sarah Siddons’ daughters have become as hopelessly muddled in portraiture as they were in Lawrence’s mind.

Like most mothers, Sarah Siddons, the prophetess of emotion on stage, could not save her daughters from their own feelings in real life. Sally never blamed her mother for the part she played in the psychological drama – it wasn’t a love story – involving Thomas Lawrence’s successive courtships of her and her younger sister which turned into a grisly ring dance when the rejected Maria became fatally ill with consumption.

Her family and friends watched her helplessly as she wasted away in almost incessant pain. She was only nineteen when she died, but she looked like a seventy year old woman.

4 comments on “In this world and the next: a tragedy of gender and celebrity”