or, Fashioning a Library of One’s Own 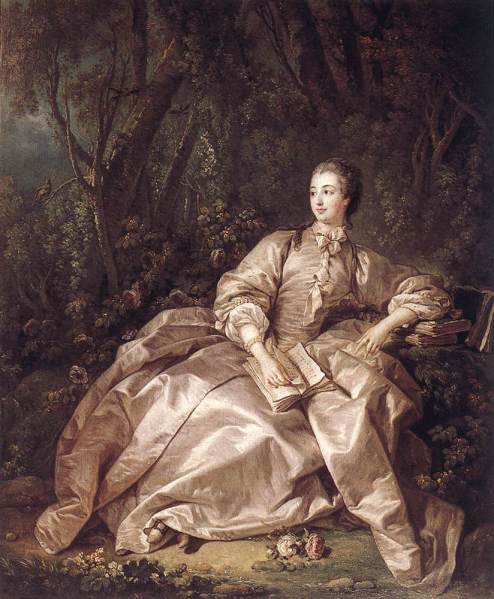 Boucher, Marquise de Pompadour 1758, Oil on canvas Victoria and Albert Museum. Image source: WGA
Is this escapism or fashionable accountability? Is she trivial, or transcendental?

In this charmingly informal publicity portrait, the most powerful woman in France during the reign of her lover and friend Louis XV is momentarily distracted from the pages of an edifying book by the beauties of nature.

It is the characteristic pose of 18th century sensibility and reason, but the gentle, almost elegiac, romanticism of the painting is unusual for Boucher, who peddled decorative erotica to the French court. He wasn’t interested in real trees, but in the silky texture of cloth and flesh, the translucence of pearls, rose petals and female skin. Here, he restrains pinkiness, he creates a contemplative mood, of private communion, of an innocent wistfulness foreign to Versailles.

The relative unfussiness, and high necked modesty, of her dress is significant, too; Madame de Pompadour understood fashion language, and not a nuance or ruffle is without profound meaning.

Within the confines of etiquette and politesse, she is ahead of the Romantic trend, anticipating the graceful simplicity of dress of pre-Revolutionary Europe adopted in the 178os. Rather as Napoleon admitted that he could not have conquered Prussia if Frederick the Great had been alive, it is impossible that the gross excesses of the high hairstyles and enormous paniered skirts of the

1770s would ever have taken hold if Madame de Pompadour had still been around.

They are fun for us, as fantastical art exhibits, fashion for fairy tales, powdered beehives carrying ships and mice, but in the real wearing they mocked good taste, hygiene and the deprivation of the rest of humanity.

Madame de Pompadour was an actress who knew the difference between escapism and accountability; she could tell a metaphor from haute couture.

As is evident from the detail of the book and the woodland setting – well, Boucher’s idea of a woodland setting – she was a patroness of Rousseau and embraced the new sensibility to feelings and humanity’s relationship with the natural world.

She read his books attentively, as well as the works of Voltaire and other philosophes, and kept in touch with their progressive thinking even after twenty years of living at Versailles. She lived in the moment, but she was not in denial of national crises, or of the disastrous consequences of royal policy. The king’s problems became her problems.

Towards the end of her life, she was heard quoting from Rousseau’s The Social Contract (1762): “Man is born free, and everywhere he is in chains. One man who thinks himself the master of others, but remains more of a slave than they are”.  In her compassion for Louis the man, she was trying to give the king a moral get-out clause, an excuse for his lethargy towards reforming the French State.

In the conduct of her relationship with Louis XV she exemplified the Rousseauian ideal woman, educated, virtuous and refined, dedicating all her gifts to pleasing her man. The two of them, in Rousseau’s philosophy, amounted to a whole human being. She put his feelings first; above and despite everything, she was always good-tempered, the paragon of an 18th century virtuous wife, as the fictional English Serena was exhorted to be in The Triumphs of Temper.

Her extravagance at the expense of the French people was devoted to pleasing him, with ravishing changes of dress, interior decoration and entertainments, but she had a sense of responsibility to the nation, and took her role of cultural leader seriously.

Some privileged people become patrons of the arts and sciences only to show off; Voltaire believed Madame de Pompadour was a genuine friend and protector of the philosophes. She came from the same bourgeois background as them. While she was still Madame d’Étioles, already planning her career as the king’s mistress – and it was a career for her, not a temporary sexual position – she held a salon at her marital home which Voltaire had visited. He observed her throughout her public life, and at the end he still approved.

The heart of la Pompadour belonged to the king, but her mind to the intellectual reformers of the Enlightenment. She supported the Encyclopédie of Diderot and d’Alembert, who wanted “to change the way people think”. She went as far as she dared to bring the king and court in touch with modern reality.

Along with Madame Adelaide, one of the king’s daughters, she was one of the great bibliophiles at Versailles, whose collection included works of history, biography, philosophy, art, architecture, geography, plays and novels.

One of the 3525 rare and precious books in Madame de Pompadour’s library, bound in red leather and gilded with her coat of arms.