I’m still looking at her. I lied in the previous post about ambivalence. I know very well that she is informed, not defined, by other people’s abuse.  This post is too long for comfort, but if you want to see Artemisia Gentileschi meet Jane Austen, read on. 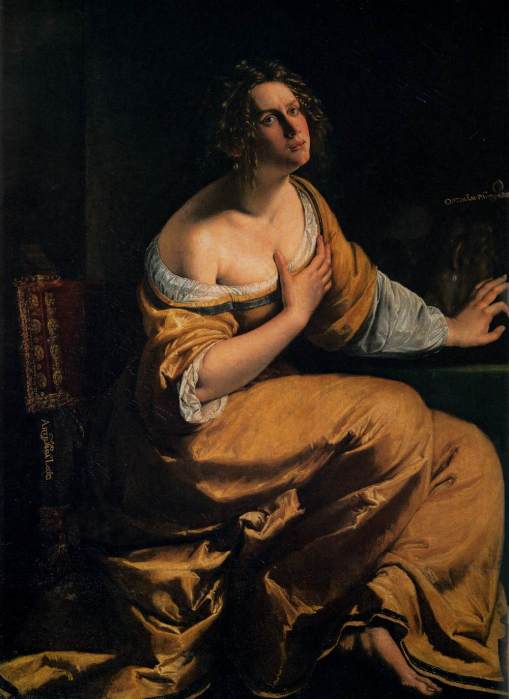 “Till this moment I never knew myself”
Jane Austen, Pride and Prejudice, 1813

Whatever the true source of her anguish, the distraught Magdalen is looking into the darkest shadows of her psyche. She is examining her own actions, thoughts and feelings, holding herself to account. We are looking at her at the moment she knows herself.

Gentileschi also cast Mary Magdalene, the sinning woman, as the personification of  Melancholy, an ambivalent attribute.

The Renaissance began the modern cultivation of melancholy, or predisposition to depression, as a desirable creative condition, on the dubious premise that the more you suffer, the better your art. This has been proved true only in cases where there is pre-existing talent and a strong technique. Intensity of feeling alone never wrote a good book or painted a great picture. greatest struggle is to transmute personal experience into art

Gentileschi’s interpretation of a passive Temperament is characteristically unromantic: the sensual, dishevelled Magdalene is slumped in her chair, looking like a lethargic and sulky teenager, the opposite of her usually dynamic heroines.

Gentileschi (the daughter, not the father, the overshadowed Orazio, a dutiful father and fine painter in his own right) is a colussus straddling art and gender history. Her painting survives positive discrimination tests. If her work had been painted by a man, we would remark in a poncy way that, technically, the composition and chiaroscuro were influenced by Caravaggio, but that the treatment of subject matter was uniquely and violently feminist for its time, a revolution in gender perception.

If modern men abusing their power knew what women like Artemisia Gentileschi thought of them they would never – but of course they know, unconsciously, and they are rightly terrified. 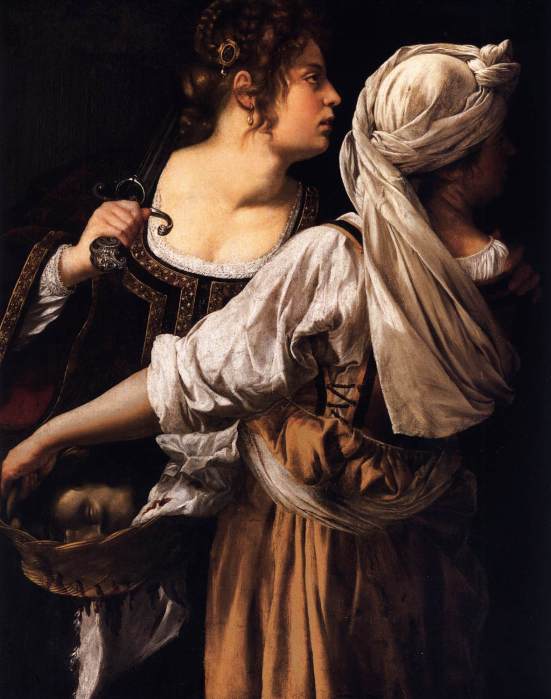 Class and gender politics: Judith and her Maidservant 1614-20
Galleria Palatina (Palazzo Pitti), Florence. Image WGA.
The beheading of Holofernes by Judith was a popular commercial subject that Gentileschi treated many times, always focusing on the ferocious intensity of Judith and her accomplice and the practical challenges of hacking off a man’s head and concealing it afterwards.

Most things in life are ambivalent, and, over centuries, prurient and repressive sex discrimination, has given invaluable advantages to capable women. Unlike her male contemporaries, Artemisia Gentileschi was legally allowed to draw and paint female nudes from life. 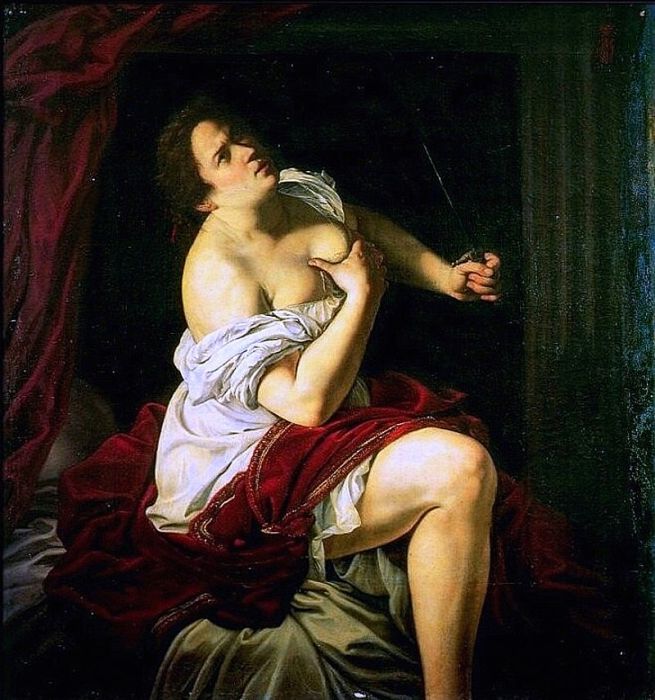 In 1611, when she was about 19, Artemisia Gentileschi was raped by her art teacher, Agostino Tassi, a previously convicted serial rapist, also suspected of ordering his wife’s murder.

Deceived by Tassi’s promise that he would marry her, Artemisia acquiesced in sleeping with him several times after the rape. She and her father were not afraid of disclosure. During the trial, as in similar cases before and since, the victim’s own character was defamed. As part of checks on her sexual history, Artemisia was tortured, by women,  midwives ordered to examine her genitalia.

She had painted the biblical story of Susanna and the Elders before her first sexual experience with Tassi. In her interpretation, the young woman’s body writhes in disgust at her harassers. Susanna is so young and trusting of adults and respectful to men, she is helpless.

After the trial, Artemisia never painted a woman looking like a victim again.

The women in her mature paintings have already suffered abuse, and are moving on, seeking closure. They take full responsibility for themselves; they will be informed, not not defined by what other people have done to them.

Confronting their suffering empowers them. They are strong, introspective, assertive, independent, capable of extreme, sometimes murderous, violence. Like their slightly older Renaissance contemporary, Lady Macbeth, they are unsexed.

Gentileschi’s subject is the psychological after-effects of abuse on women, not abuse itself, or its male perpetrators, who are out of the picture, beneath contempt. She is interested in the magnificence of the female nude and female emotion, not in exploiting female vulnerability.

Nothing Compares 2U: Bathsheba at her Bath Neues Palais, Potsdam.
Bathsheba bathing, surrounded by her attendants, was one of Gentileschi’s favourite subjects throughout her later career. The colours of this version are dimmed by time (the Pitti has restored its own copy to luminous glory) but the finely judged balance between casual elegance and physical strength of the women’s poses is intact. This Bathsheba is sweetly pretty, painted with tenderness.
There is camaraderie and eroticism in an intimate scene entirely free of prurience.

Nothing frivolous, rarely anything pretty, intrudes on the monumental composition of her paintings, where a constant battle for light and dark is played out with unforgiving realism.

She portrays women in moments of terrifying self-knowledge, finding reserves of passion they had never guessed at before.

Her women are not victims or martyrs, projecting neither self-pity nor self-promotion. They take responsibility for their actions and emotions. They are heroines, avengers and fighters for justice; they are autonomous women.

Clio, the Muse of History or An Allegory of Fame 1632 Oil on canvas Cassa di Risparmio di Pisa. Image: WGA

Whether she represents History or Fame (the trumpet is the cause of confusion),
she is painted truthfully, which is more than we hope for nowadays.

“We have all a better guide in ourselves, if we would attend to it, than any other person can be.” Jane Austen Mansfield Park 1814

and – FOR AN EXCELLENT ACCOUNT OF ARTEMISIA GENTILESCHI VISIT E-TINKERBELL