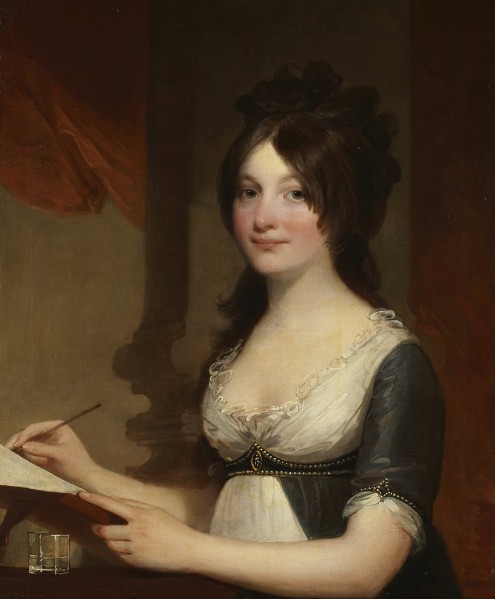 Portrait of a Young Woman, writing a letter, by Gilbert Stuart, c. 1802 -1804. Image courtesy of the Indianapolis Museum of Art. I am sorry to have interrupted her; she is rather lovely, rather to be loved and written about than briefly employed as a cover girl.

All roads in this land lead to Pemberley. Jane Austen, the prosaic revolutionary, waits quietly, with gloves and bonnet on, at the crossroads of 18th century and modern novels. The bonnet conceals the expression in her eyes, which isn’t quiet at all.

Audio: Till this moment, I never knew myself

Pride and Prejudice, which seems so fresh and spontaneous on every reading, took eighteen years to evolve, from the first draft written in 1796-97 to publication in 1813. It had a gestation period almost as long as the heroine’s life at the stage when we first meet Elizabeth Bennet, aged 20. And which of us remembers anything before we are two, anyway?

Poor Clarissa Harlowe was only eighteen when her ordeals, recorded in epistolary form by Samuel Richardson, started.

Clarissa is an articulate, morally courageous young woman, not immature at all, whose fortitude and capacity to forgive her abuser overcomes adversity far more severe than any suffered by an Austen heroine – and yet she has martyr written all over her, which Elizabeth Bennet, Emma Woodhouse and Elinor Dashwood, even Marianne Dashwood, Fanny Price and Anne Eliot, do not.

Their creator gave them autonomy. They step off the page. They walk into our minds, and they get transplanted into other times and places. They dress and speak differently in all these reincarnations, their education and professions and leisure pursuits vary, but they are still recognizable, except, perhaps, when attacked by zombies.

They are not social rebels; they don’t demand equal rights. They would have been deterred by the violent excesses of the French Revolution which had just rocked Europe. The only revolutionary changes that take place are in their own heads.

They are not submissive and they refuse to be victims. They are paragons of self-improvement, never blaming other people or fate for their shortcomings.

They are intelligent young women, articulating a life of the mind richer and more independent than offered by ribbons, posies and billets-doux.

Jane Austen began writing novels on the conventional epistolary model, and quickly abandoned it after Lady Susan (c. 1794), and the first draft of Sense and Sensibility (c. 1795). END_OF_DOCUMENT_TOKEN_TO_BE_REPLACED