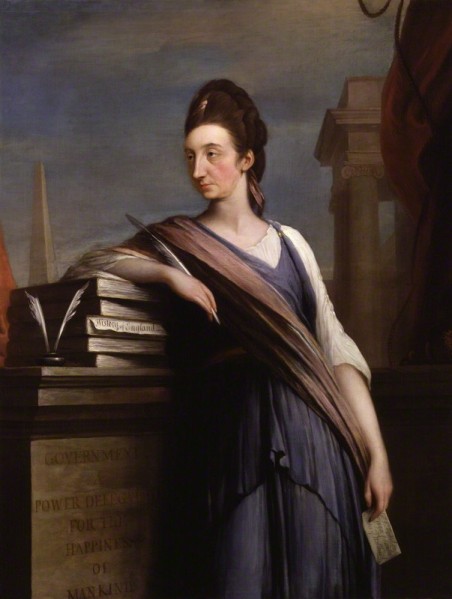 Macaulay (2 April 1731 – 22 June 1791) argued that if distribution of wealth is not evenly balanced, society will break apart, and anarchy followed by tyranny will ensue.

“every citizen who possesses ever so small a share of property, is equally as tenacious of it as the most opulent member of society; and this leads him to respect and to support all the laws by which property is protected.”

“….it is only the democratical system, rightly balanced, which can secure the virtue, liberty and happiness of society”.

She was a democratic republican who supported the American and French Revolutions.

She saw that power given to a privileges few corrupts them, and that they too readily lose accountability. The people, if their trust has been betrayed, have reasonable grounds to oppose autocratic government:

“the people may possibly object, that in delivering themselves passively over to the unrestrained rule of others ….they deliver themselves over to men, who, as men, and partaking of the same nature as themselves, are as liable to be governed by the same principles and errors; and to men who, by the great superiority of their station, having no common interest with themselves which might lead them to preserve a salutary check over their vices, must be inclined to abuse in the grossest manner their trust.”

She called for better education for women, like her younger contemporary Mary Wollstonecraft, so their sex could at last take their place in society as equal citizens to men.

She was a member of the Bluestockings circle of leading women intellectuals and artists; she was a correspondent, and inspiration, of the American political writer Mercy Otis Warren, who praised her “Commanding Genius and Brilliance of thought”. Together they shared ideas for improving society and denounced the tyranny of the British government as the violent behaviour of an “unnatural parent”. 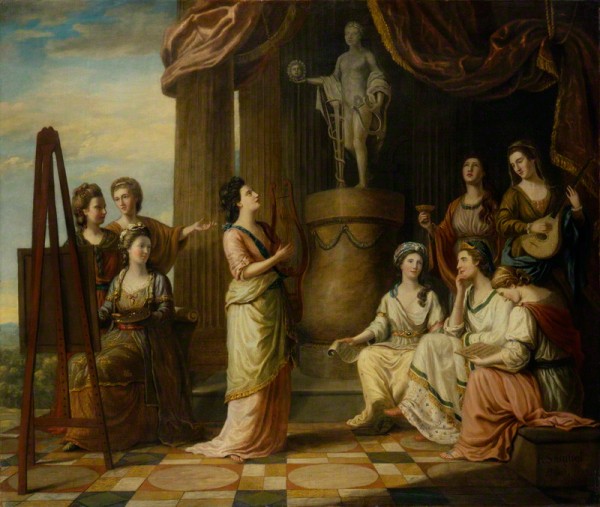 Portraits in the Characters of the Muses in the Temple of Apollo by Richard Samuel, oil on canvas, exhibited 1779. © National Portrait Gallery, London.
Another 18th century Leibovitz-style celebrity group portrait of nine extraordinary women, linked by their intellectual and artistic interests to form the Bluestockings.
They are still familiar names today for their achievements, including the novelist Charlotte Lennox, the painter Angelica Kauffmann and the anti-slavery campaigner Hannah More. Macaulay is seated on the plinth, holding her historian’s scroll.

Their self-conscious poses are a lot less awkward than the ones in last year’s M&S iffy ‘Leading Ladies’ advertizing campaign, and Marks might get some inspiration for womenswear from the neoclassical look.

or The Moral Dangers to Young Women of Reading 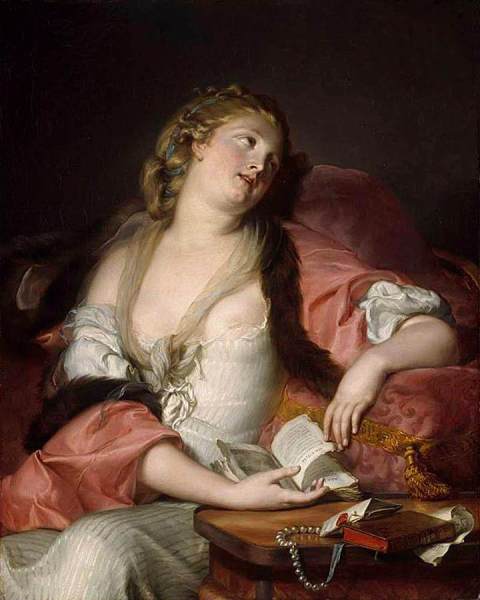 Depending on what you want from a book, you might say “I’ll have what she’s having” and sales of the book would exceed Fifty Shades of Grey and Harry Potter combined.
Bernard d’Agesci Lady Reading the Letters of Heloise and Abélard
c.1780 Oil on canvas, Art Institute, Chicago. Image source: WGA

In the age of Enlightenment and Sensibility, women were encouraged to read moral novels for self-improvement, and discouraged to read anything politically or sexually exciting, so of course they did, with an all-consuming passion.

So, as is the way of the world, portraits of girls reading became a popular soft-porn genre for men, sometimes unconvincingly disguised as moral warnings.

Moralists and misogynists could berate as much as they liked, but it was in no-one’s interests to stop women reading novels, either for instruction or diversion.

For all sorts of reasons, many people of both sexes were afraid of independent thinking, erudite women, like the Bluestockings, so they laughed at them, the premise of the jokes being that having more sex or children would set them right.

There were exceptions, women whose learning and writing was of so high a quality or relevance that it transcended gender prejudice. No sensible man could deny that these female authors were rational creatures.

Catharine Macaulay, by Robert Edge Pine, oil on canvas, circa 1775 © National Portrait Gallery, London
Historian, political writer and activist, republican supporter of American Independence, opponent of inequalities in wealth, and proponent of co-education, linked to the ‘Bluestocking’ group of intellectuals, she explained she had been “a thoughtless girl till she was twenty, at which time she contracted a taste for books and knowledge…” She lost the respect of her contemporaries not for any flaw in her intellectual system, but because when she was forty-seven she married a man twenty-six years younger than her.

At the same time as women declared their intellectual and moral equality there was a huge increase in light literature. In the new enlightened culture, men and women both believed in the importance of educating girls, if only for the amelioration of the male condition, and this could be best achieved through presenting complex or lofty ideas in an entertainingly accessible way. END_OF_DOCUMENT_TOKEN_TO_BE_REPLACED