or, Perversion of Innocence

Boucher, The Toilet of Venus 1751 Oil on canvas, Metropolitan Museum of Art, New York,
“commissioned by Madame de Pompadour as part of the decoration for her cabinet de toilette at the Château de Bellevue, one of the residences she shared with Louis XV”. Text and image source: Web Gallery of Art

Whipping up salacious fantasies of royal sexual perversion became a key part of revolutionary propaganda, but the worst accusations of depravity were always reserved for women.

Even the rumour that Louis XV had fathered a child on one of his own daughters, Marie-Adelaide, seems to have been aimed more at crushing her limited influence at court than attacking the king’s depravity.

The chief victim of misogyny was the king’s granddaughter-in-law, Marie Antoinette, who was accused at her trial of sexually abusing her own son. 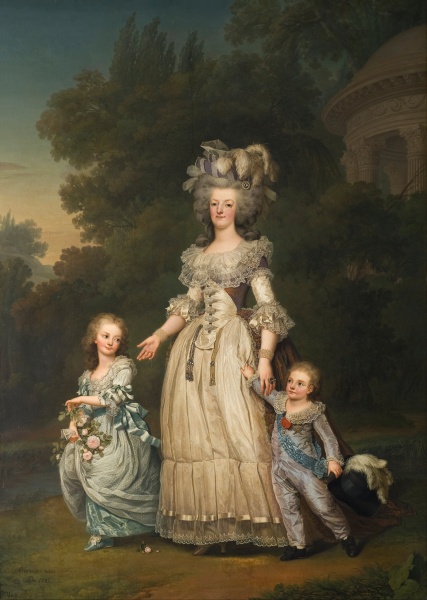 Adolf Ulrik Wertmüller, Marie Antoinette and her two eldest children walking in the park of Trianon (1785) oil on canvas, Nationalmuseum Sweden. Image source: Wikipedia.
Like any conscientious mother trapped in a rigid class system, the queen was doing her best to bring up her children with enlightened modern values, in this case the Rousseauian ideals of lots of fresh air and simple clothes.

The new ideas about upper-class women being allowed free expression of maternal emotion were extolled in fashionable portraiture, and were then perverted by Marie Antoinette’s political opponents in the most inhumane way conceivable to discredit her, the mother turned into whore, the ultimate degradation of the “Austrian bitch”.

Vigée-Lebrun, Self-portrait with her daughter Julie, c. 1789 oil on canvas Musée du Louvre, Paris. Image source: WGA.
Marie Antoinette promoted the careers of many women artists through her patronage. She used Vigée-Lebrun frequently to try and improve her public image as an enlightened, not spoilt and despotic, queen, whose sensibility was the same as any other devoted mother’s of her time.

Boucher, Diana Resting after her Bath 1742 Oil on canvas, Musée du Louvre, Paris. Image source: WGA
Here, in the most intimate picture of a podiatrist and her client ever presented, Boucher celebrates feminine sensuality with more subtlety than in the flagrant eroticism of his odalisques.

The playful sensuality of Rococo imagery, of Venus tenderly embracing her son Eros, of happy cherubs dive-bombing naked nymphs, the suggestiveness of Boucher’s pastoral idylls, of nymphs and goddesses delighting in their own and each other’s nakedness, his version of the Rousseauian ideal of female sensibility which had inspired so many fashionable women to be candid about their feelings for one another, all this varnished innocence was inverted and made dirty. 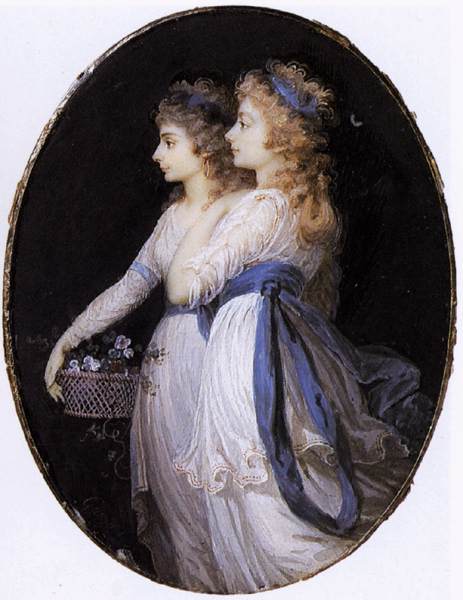 Guérin Georgiana, Duchess of Devonshire, with Lady Elizabeth Foster c. 1791
Miniature on ivory, Wallace Collection, London. Image source: WGA.
Female friendship and the benign influence of feminine sensitivity and refinement on culture and society as a whole was valued and celebrated.