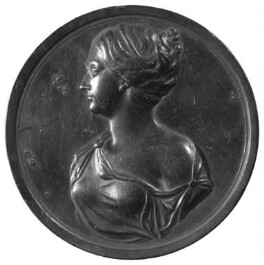 Silver medal, 19th century, based on a work of circa 1667 © NPG
Frances Stewart, chosen for her impeccable Roman profile, was depicted on two commemorative medals celebrating rare English victories during the Anglo-Dutch naval wars.

Pepys, who checked out all King Charles II‘s mistresses in detail, like a creepy judge at a beauty contest, thought the young Frances Stewart was the best-looking of the lot. She was a celebrity in France, too, where the bitchy Comte de Gramont said “it would be difficult to image less brain combined with more beauty”.

Like Maria Gunning a century later, she must have got used to being called beautiful and stupid. Maybe Frances was shrewd enough to play dumb, like Lorelei Lee, who knew how “to be smart when it’s important”, because she managed her life and her money more sensibly than most of her wittier, cleverer contemporaries.

Court observers suspected her of coquetry while playing the long game of becoming queen if the king’s wife died. As with most royal mistresses, there was a political faction pushing and grooming her, just as there are agents and casting directors and publicists promoting a starlet.

Frances, the socially ambitious daughter of a very minor courtier, distantly related to the royal Stuarts, had been talent-scouted at the French court, where she had been trained in flirtation, a more useful education than most pretty, vapid upper-class English girls of the Restoration were likely to get.

Unlike their Tudor ancestresses, Restoration girls were brought up in ignorance. The great feminist writer of the late 17th century, Mary Astell, denounced the education given girls as useful only “to make a fine show and be good for nothing.” She asked the rest of her sex, “How can you be content to be in the World like Tulips in a Garden?”

Frances excelled at all the things that made a fine show – dancing, playing, fashion and flirting – and her apparently empty head kept her safe from controversy. Clever men and women look down on apparently stupid girls like Frances unwisely.

If you were very good at flirting, you could use it for protection as well as promotion. It actually was good for something, like being good at politics.

And Frances, once she realized she was never going to be a queen, was playing a much longer game than the spiteful gossips guessed.

She married her duke, also a Stuart, when she was nineteen, was widowed at twenty-five and never married again. For the rest of her life as a Tulip she enjoyed high social status, wealth and prestige and, by not re-marrying, a rare degree of independence. She was adept at financial and estate management. She did not have children. She was a virgin again.

Maybe she didn’t enjoy sex. Maybe she disliked, or feared, physical intimacy. Maybe she wanted autonomy. After the frenetic sexual hide and seek, the flattering attentions and unwanted harassment of her teens, she won her freedom from patriarchal control.

She and the king were reconciled after her marriage and remained friends till his death, which was the happiest ending for the debonair predator and the chaste huntress. 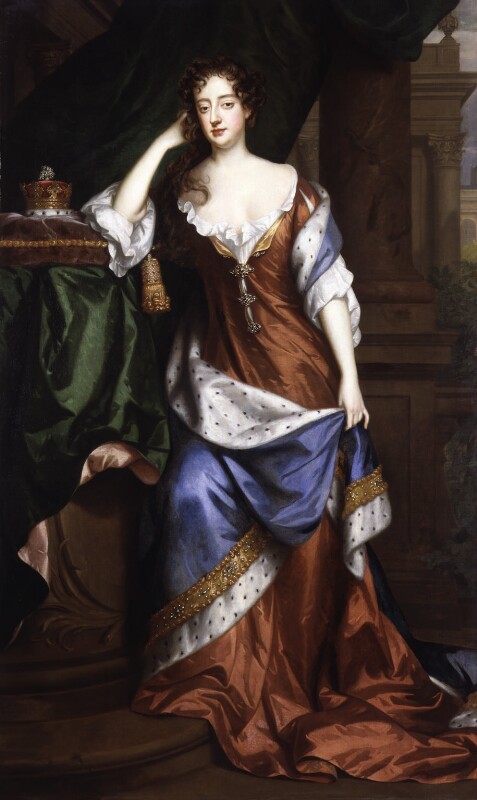 Frances Teresa Stuart, Duchess of Richmond and Lennox
by Willem Wissing and Jan van der Vaart
oil on canvas, 1687. © NPG
Frances, painted two years after Charles II’s death, aged 40, dressed in her Duchess’s state robes, resting her elbow next to her coronet. She was long since free of the Duke, her husband, and enjoying all the advantages of her position.
Late 17th century court portraiture elongated the female figure, but Frances was tall in person, too. She was 5’8″. Queen Mary II (1662 – 94) was 5’11”, the same height as her great-great grandmother, Mary, Queen of Scots. It’s a myth that everyone in history was shorter than us. In the 1690s there was a movement, encouraged by Mary, against libertinism which attempted to eradicate the worst obscenities in social behaviour. The new seriousness was reflected in the subdued colouring and
sedate poses of their portraits.

The gift of beauty that Frances was granted is misunderstood by envious people. Psyche’s trials and tribulations were mostly caused by jealous women, including her own mother-in-law, Venus.

Beauty gives more joy to the beholder than to the owner who has the lifelong task of looking after it. Before inoculation was introduced in the 1720s being a beautiful female mortal was doubly hazardous because even if you were lucky enough to survive childbirth, you could so easily lose your looks or your life to smallpox.

La Belle Stuart was scarred by the disease in 1668, when she was only twenty, but she survived to be fifty-five, still small-waisted and elegantly proportioned, her face still distinguished by her sweet smile and her perfect little Roman nose, commemorated by her life-size wax funeral effigy, dressed in a duchess’s coronation robes, that stands in the vault of Westminster Abbey. 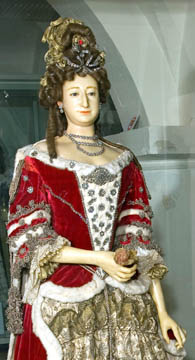 The memorial was her own idea. The other effigies of kings and queens around her look stiff and stolid, their faces tired and blank, as if they can’t bear the thought of another performance. Waxy, painted, corseted elderly Frances, false hair curled and piled high in a fontange, looks vibrant, walking towards her audience with the sprightly step of Diana the Huntress, with wide open eyes and that charming smile.

This is the fame she always wanted, with a title and the royal Stuart name, and no-one to touch her.

She is accompanied by a stuffed grey African parrot, who had been her constant companion in life for forty years. Together they make the most touching tableau among all the eerie monuments of the Stuart Age. 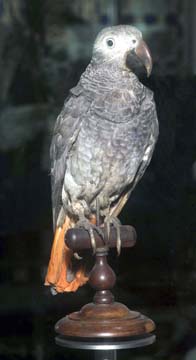 The case that Charles II, the most priapic and charming of English kings, only practised consensual sex with women is supported by his treatment of the teenage Frances Stewart, later Duchess of Richmond, a tall, slim, blue-eyed dark blonde, who turned him down repeatedly, except for kissing in corners, in full view of non-paying voyeurs like Samuel Pepys. 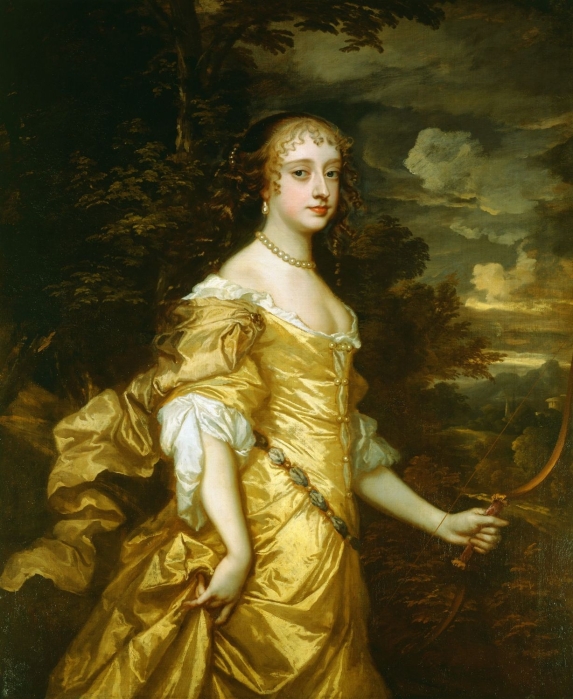 Frances Stuart, later Duchess of Richmond, by Sir Peter Lely, before 1662. Royal Collection. Image: Wikipedia
La Belle Stuart is portrayed in the character of the virginal huntress, Diana.
She looks like a golden sugared plum, a dainty dish to set before the king,
which is how she was treated in reality.

The royal chase lasted four years. Charles II wanted this splendid specimen in his harem. She preferred to elope with a duke than be the king’s whore. Rather than sulk or threaten to destroy her career, as a lesser man or misogynist might have done, the king, once he got over his resentment and was back in his usual good humour, made her famous for ever by using her as the model for Britannia on the national coinage, with her consent.

That is the story, anyway – Pepys’ story, of course. The influence that one man’s gossip has had over English history is unfathomably pernicious. Why trust a diary, anyway? It is not a reliable testament, any more than the average blog; a diary is for re-writing history before anyone else can, score-settling, wish-fulfillment, slavering over sex fantasies with the royal mistresses, confessions of groping women in church, a whitewashing of days to make the diarist sleep better at night.

Whether the Britannia anecdote is true or not, Pepys helped make Frances famous for centuries after her death, and the figure on the coin sexier. 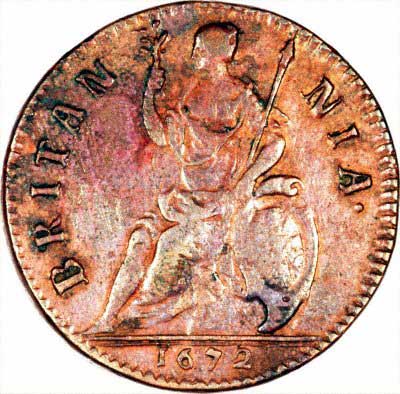 The 1672 copper farthing, showing Britannia, supposedly based on a likeness of Frances Stewart, Duchess of Richmond (1674 – 1702), seated on a rock, holding a spear and an olive branch in either hand. The figure and pose were inspired by Roman coins. Frances was celebrated for her Roman profile, and tall, graceful figure,
so it is plausible that she was the model.

And how do we know who slept with whom? Who cares? What moral lesson do we learn? What archetype are we recognizing or longing for?

Whether or not Frances ever had sex with the King, it suited both of them to perpetuate the charming myth of her virginal resistance. Charles, according to the letters he wrote to his sister Minette, had genuinely deep feelings – “tenderness” – for Frances and was hurt by her behaviour – “as bad as breach of friendship and faith can make it”. Whether their relationship was sexually consummated or not, she was supposed to be his trophy, part of his collection.

After her husband the Duke of Richmond died, in 1672, the King granted the widow an annuity of £1000. He was generous to all his mistresses, even the one that said no. He stayed friends with them. It seems that the “easiest King and best-bred man alive” during cared about women as people, not objects.

Rochester in his Satyr on King Charles II also described the “merry monarch” as so “Restless he rolls about from whore to whore”. We – I mean me – are still charmed by King Charles, contemptuous of Mr Pepys.

They were both predators, in an era of unmitigated sexual harassment, and if either of them touched me, in controlled holographic conditions, I’d tell them to stop – but I’d flirt with one and slap a Court order on the other #metoo. Frances Stewart must have felt the same.