I was thinking all night of the post I’d write about a clock, an 18th century clock. It started with the clock, anyway, and ended up being more about a mother and daughter.

It was going to be a post about self-isolation and self-improvement, about reason and tolerance defeating ignorance and greed, about women’s fight for equality and independence; about jealousy and love, egos and guillotines; about rebellion and restraint; about philosophy, education and religion; about gaiety, satire and burlesque – lyrics from Gypsy were going to be included (“Sing out, Louise”) – it was a mess, less than the sum of its parts.

The object still exists for you to look at. All you need from me is a link. No words. Everything has been said before. No more blogging, I say.

Instead, I’m copying and pasting a Tweet from the journalist John Crace, about today’s cause célèbre, the latest gobsmacking hypocrisy of the Vote Leave coup leaders who are turning the ancient democracy of Great Britain into a shoddy dictatorship, a tax haven for corrupt, nihilist capitalists, while the rest of us, if we survive the plague, will die from poverty and bitterness, and malnutrition from lowered food standards.

We will be deprived of freedom of movement to work and live and love where we want in Europe, our continent. For some of us, that freedom and that love are the meaning of life itself. We have been dispossessed. We are aliens in our own country.

The rich will still be able to do what they want, just as Cummings, Great Britain’s eminence grise, did during lockdown, when, knowing he and his wife had COVID-19, he flouted government restrictions by travelling 260 miles to visit his elderly parents with his four year-old child.

Cummings, in his own mind the child of Machiavelli and Nietzsche, doesn’t care; the pastiche prime minister/world king manqué and his equally over-entitled, even creepier associates (who can’t wait to stab him in the back) don’t care; they know there will be no consequences for the shameless. They are unaccountable. They have called democracy’s bluff.

They prey on human frailty. They play on the ordinary person being as selfish and venal as they are. They taunt and tempt like the sleazy admen and dodgy goods’ salesmen they are.

Everything they offer you has fallen off the back of a lorry. They know most of us know. They don’t care. Look how we can spin! Aren’t we funny! More entertaining than the Opposition. Razzamatazz! (Theatre is dead, due to Coronavirus, showing off isn’t.) Bragging how you have twisted the truth impresses more, nowadays, than telling the truth.

If you weren’t as bad as them before, you will be soon.

According to @michaelgove
and other cabinet ministers,
those of us who didn’t break government guidelines
to drive 250 miles just didn’t love
our families and friends enough

Another Tweet, from Aditya Chakrabortty, sums up the depth of this government’s betrayal of a nation:

And, because I can’t bear to leave you without something old and pretty, here’s the link to a relic from the Age of Enlightenment and Reason, a neoclassical feminist clock illustrating the power of solitude: 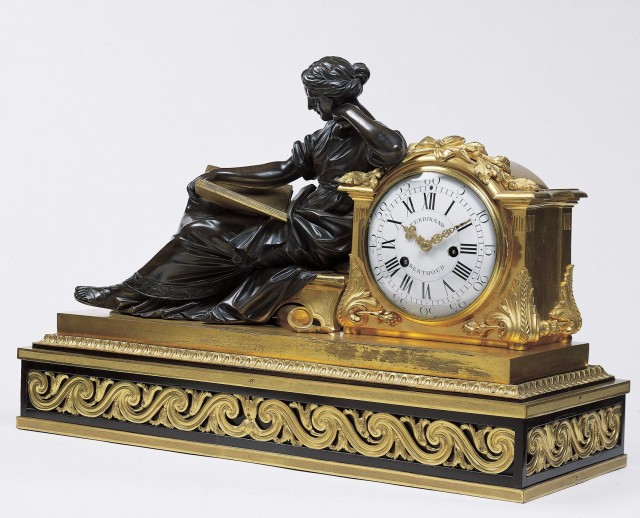 “One must work with time and not against it.”
Ursula K. Le Guin, The Dispossessed

Feeling weary, stale and unprofitable, I’d vowed to give up blogging for a while, but the always happy thought of Elizabeth Barrett and Robert Browning has spawned this self-indulgence.

As I mentioned before, I was named after Browning’s Pippa Passes, and immersed by my mother in the love story of Robert and Elizabeth while I was growing up, Flush the spaniel and all. For a long time, as happens with history’s celebrities, their romantic personae overshadowed the value of their individual work.

Elizabeth Barrett Browning by Field Talfourd, chalk, 1859 © National Portrait Gallery, London. She was about fifty-three when this likeness was taken; allowing for artistic flattery, she retained an astonishing girlish beauty, despite fragile health and a laudanum addiction.

If ever there was one, theirs appeared to be a marriage of true minds. It is painful to consider the possibility that in reality he had a restricting effect on her writing, specifically on her social and political freedom of thought. Robert had trouble stopping Elizabeth from dressing their only child, their son Pen, as a girl. Ignore, ignore, forget, forget, facts are only the dreary letter, not the spirit of truth.

And, anyway, Pen grew up filial, amiable and cheerful, a lover of Italy, a restorer of a palazzo, a painter and a bon vivant. He did not inherit his parents’ intellectual genius or determination, he was not in the least poetic, but he did not implode, either.

Robert Browning by Field Talfourd, chalk, 1859 © National Portrait Gallery, London. Browning’s affiliation to Team Jacob must not distract us from appreciating that he was considered an irresistibly handsome man by mid-Victorians, who favoured the whiskered werewolf look over the clean-shaven vampires of later in the 19th century.

More embarrassing to admit is that, when I was very small, without Luixe’s Genealogy of Style to guide me, my mother and I took our enthusiasm so far as to sing along to the 1960s musical Robert and Elizabeth in which June Bronhill surpassed the highest notes previously known in musical theatre. She could, and did, shatter glass. END_OF_DOCUMENT_TOKEN_TO_BE_REPLACED