At last, 11 days late, THE CAPTAIN’S WALLFLOWER has been released in the UK, but what do I care, I’m happy riding a hobbyhorse until I fall off….

The Victorians and Edwardians revised Regency style for a contemporary audience, fed up with stuffy Victoriania, and in doing so drained the real Regency of its blood and guts, replacing Romanticism with romanticism, sense and sensibility with archness. 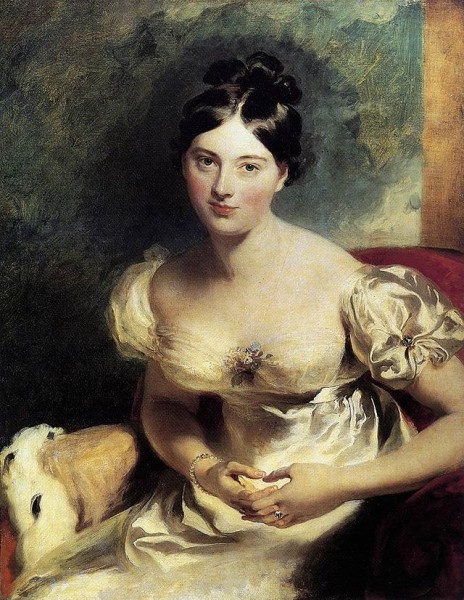 Supremely self-aware, the Countess of Blessington shares a candid moment with her portraitist Thomas Lawrence (Oil on canvas, 1814. Image: WGA) While enjoying her sexual charms, he notes her vitality and intelligence (she was a novelist, journalist and literary hostess). There’s nothing arch or simpering about the woman or the artist.
Lawrence was a celebrity flirt: every portrait session with him, whether you were a man or a woman, was a Regency Romance in itself.

Fictional Regency heroes, like their historical models, incarnate the classical ideal of a healthy mind in a healthy body. They are likely to have been trained on the playing fields of Eton, or Harrow, and fought at Trafalgar or Waterloo.

Snobbery is inherent to Regency Romance, but it is pervading film and theatre nowadays, too,  answering an atavistic patriarchal need whether we like it or not..

An actor of over 50 years’ experience remarked to me the other day, after we’d rolled our eyes at all those Old Etonians monopolizing the best acting parts: “They teach charm at Eton”.  It recalls the “Company of Youth”, the notorious Charm School of the Rank Organization in the 1940s and 50s. It is the equivalent of mass produced “antiqued” or “chateau” furniture.

Class-consciousness separated Keats from public school-boys Byron and Shelley, causing a gulf that only Shelley tried to bridge.

It’s reassuring to know that both the poetic rebel Shelley and the military hero/reactionary Conservative politician Wellington hated being at Eton.

The myth of the perfect English hero was consolidated in late Victorian fiction, partly by the Hungarian-born Baroness Orczy in The Scarlet Pimpernel, and explains the success of public school type actors today.

Sir Percy Blakeney is an invented 18th century, not Regency figure, but his characteristics are the same: masculine strength under a  metrosexual exterior.

Ambivalence is essential to the Regency hero’s sex appeal – and a sense of humour.

Sexual attraction combined with rom-com plot is essential to Regency Romance, but so is an arcane, or snobbish, element contained in the jargon, which you have to understand if you are to master the etiquette and be accepted into the ton along with the always charmingly unconventional heroine. Regency Romance palliates the reader’s own social anxieties. If you can succeed at that assembly room ball, you can succeed anywhere. END_OF_DOCUMENT_TOKEN_TO_BE_REPLACED