After the Restoration of the Stuart Monarchy, the fashionable ruling class no longer wanted to be portrayed in an elevated spiritual sphere where they knew they didn’t belong. The reward they claimed for going to hell and back was instant gratification, not introspection. Some of them were still secretly very religious, but knowing how short and brutal life could be, waited till their deathbeds for their conversions.

They had lived through Civil War and exile, and they didn’t want to look other-worldly like the previous generation. Nothing was sacred, except survival. A new generation of court painter was happy to oblige with contemporary takes on traditional allegory in a flashier, worldly-wise presentation. The studied nonchalance of Van Dyck’s figures, inspired by Castiglione’s The Book of the Courtier, crumpled into the straight out of bed look.

On the great consensual casting couch of the Restoration Court, Charles II‘s mistresses competed to make him laugh as much as get into his bed, and one of Lady Castlemaine’s jokes was to have herself painted as the Virgin Mary with her eldest bastard son by the king playing baby Jesus.

Barbara Palmer (née Villiers), Duchess of Cleveland with her son, Charles FitzRoy, as the Virgin and Child
by Sir Peter Lely, c. 1664. National Portrait Gallery. Image: Wikipedia
Like a modern supermodel, but without make-up, she set the look of the day. Lely used her sensuous features, the heavy-lidded eyes and full lips, as the template for all his portraits of high society beauties, so there were complaints (from Pepys, for instance, and Rochester when he saw the portrait of his wife) that nobody else looked anything like themselves.

She was a sex-addict with a terrible temper and a gambling addiction. Today, she’d be diagnosed with a personality disorder. If she was a man, we’d be terrified of her, and prosecute her for harassment. Instead, we find her entertaining, titillating, challenging, ultimately pathetic.

Barbara is famous for being the most promiscuous, and unfaithful, of Charles II‘s mistresses, portrayed as the nymphomaniac Fuckadilla in a contemporary pornographic satire. Her list of lovers, including Jacob Hall the tight-rope dancer, John Churchill, later Duke of Marlborough, England’s most victorious general, and the playwright William Wycherley, shows she picked talent. She also paid them generously.

She was a life-force, and could be great fun. She enjoyed the thrill of power, or its illusion, and exerting political influence whenever she could, but for purely selfish reasons, to settle personal scores. She acted from the heart, not the head. She was unsentimental, and sometimes compassionate, an important distinction that we have lost sight of.

She was shocking to the country outside the King’s circle, the incarnation of the immorality and waste at Court, a curse on the country, a scapegoat for all the frustration and disappointment with the restored monarchy.

She was politically useful, that way.

She was not popular, like the People’s Choice among the King’s Ladies, Nell Gwyn; she was the Bad Girl, the Dirty Girl, the Bunny Boiler, the Alien Succubus, the space vampire played by Mathilda May in Lifeforce; she was X-rated, HBO, not terrestrial TV.

She was culturally essential, that way.

There was one gender injustice she could not defy, the plight of the older but still sexual woman. Barbara was forty-five when her protector, the King, died, and everything started going wrong. She got desperate and stopped discriminating. The once gorgeous predator became the prey of bad actors and con-men. She made a disastrous second marriage when she was sixty-five to a bigamist who was after her money.

The last years of her life read like the moralists’ revenge. It is documented in the DNB that in her final illness a dropsy “swelled her gradually to a monstrous bulk”, exactly the kind of private detail about our own or our beloveds’ deaths that we would want kept quiet.

There is a very sad ghost story about Barbara, Duchess of Cleveland as an old woman lamenting her lost beauty as she walks in her high heeled shoes tapping on the wood floor to stare out of the windows of her house on Chiswick Mall.

The woman while she lived was not penitent. She seized her moment, enjoying the sexual, and bi-sexual, liberation of the Restoration Court as much as any man. Her appetites, or addictions, and her temperament were entirely suited to her time.

The female libertine did not see herself as objectified or victimized, and we should not judge her differently. 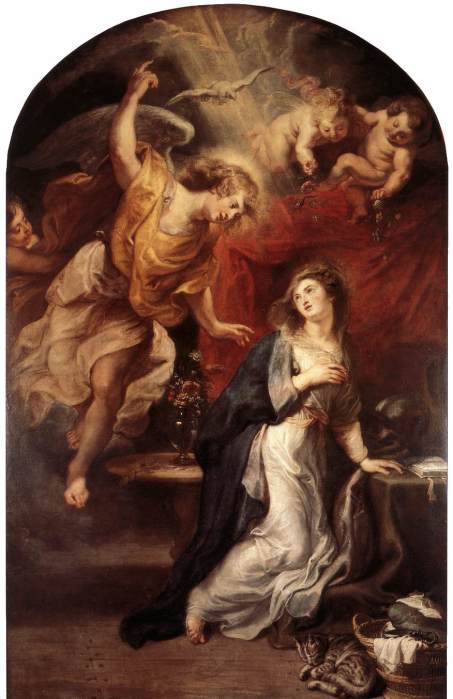 It is the same astonishing moment as a thousand times before and after – the same winged and muscular messenger, with the same soft feminine face, the same long golden hair, wearing a yellow tunic, accompanied by a dove and flying babies, interrupting a girl reading while a cat sleeps in the corner – but in a different place, light years away.

This is no baby shower, like the time before. This time the stranger does not bring the pure white flowers of virginity to present to the girl from a deferential distance. There are already flowers in a bulbous glass vase on a round table; red and pink roses unfurling petals the colour of flesh, a red tulip protruding a licking tongue. The dive-bombing cherubs are about to pelt garlands of more roses, a lover’s gift, on the girl’s head.

It’s not the same girl, or she has changed. She reads the same book, but she is not self-composed like the girl kneeling in a room in Urbino, over twenty years earlier. There is no view of a white castle, the room is dark and the floor is made of wooden nailed planks.

There is no sign of the patriarchal puppeteer in the sky. There is no formality, no inhibition, only the visitor’s knowing smile as he alights, his left hand almost close enough to touch her, and her gasp of expectation. Even the watching cherubs are louche.

This time she is aroused by the visitor’s physical presence and does not attempt to hide her feelings. Illuminated by a beam of light, she rises to meet his passion with her own, her lips parted and her uplifted eyes rolling in ecstasy. She is almost drifting into a trance. Her longing for him is mixed with reproach. She is worried about consequences.

She is Psyche in love with Eros, who has flown in through her open window at night. He is beautiful and persuasive. His power will change her life.

She is not sure she wants him yet.

A bright torch, and a casement ope at night
To let the warm Love in!

It’s not the same cat, either. This one is a tabby, coiled tight in its own sensual world, indifferent to human desires, lying on the hard wooden floor beside a work basket because the girl has forgotten for the first time in their lives to make a cushioned bed for its sleep. 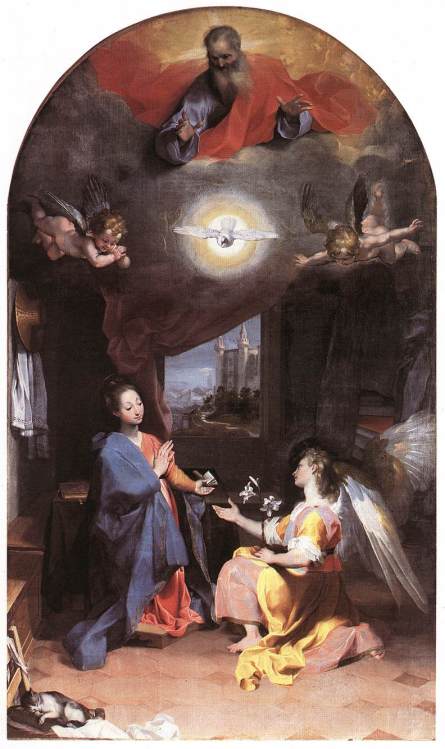 A cat sleeps on a cushion in the corner of a room while a fourteen year-old virgin receives her pregnancy results from a beautiful, transgender visitor, who presents Madonna lilies as a baby shower gift. The girl smiles sweetly, and lowers her eyes modestly. She is grateful but not surprised. She accepts the news in the composed manner of a young prima donna receiving the bouquet that her talent deserves.

The visitor has only just arrived, interrupting the girl reading a small, pocket-sized book, which she lays aside instantly, without closing the pages or rising to her feet. The girl reads a lot. She has few possessions apart from her expensively bound books. She reveres their contents, kneeling while she reads. Her room is sparsely furnished, functional; only the voluptuous folds of the dark red drape loosely knotted over the window relieve the cell-like austerity. She cares about the cat’s comfort as much as her own. She has hung her hat and shawl neatly on a hook. The polished stone tiled floor is clean.

Nothing else is normal, and yet the scene is familiar. The visitor, who kneels before the girl as if she is a queen, has wings, and is accompanied by two over-excited flying babies, clapping their hands and gurgling with joy on either side of a hovering dove. The window drape looks like a stage curtain, framing a view of a white turreted castle on a hill, guarding a city beyond, a landscape in fairyland.

Strangest of all, the ceiling has been removed from the room. The billowing curtain blends into clouds that separate to allow a gigantic elderly man with a long beard to peer down out of a hole in the sky. Golden light radiates behind him, crowded with faces of more chubby babies, made of the Sun, all pressing closer and closer to the girl in the room. He holds his hands palms down over the girl like a puppeteer pulling invisible strings.