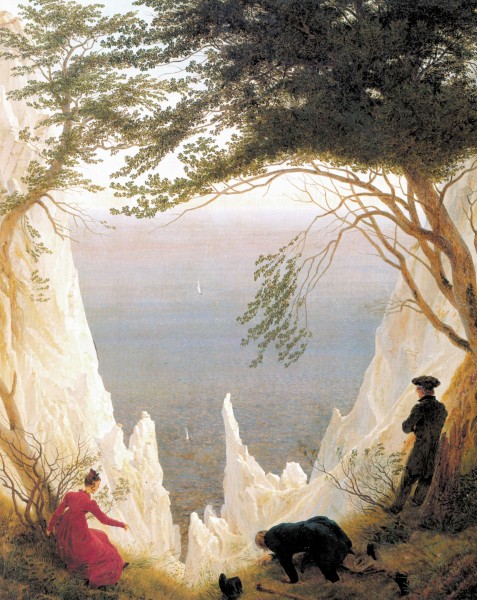 Last February, we visited the island of Ruegen on the morning after a great storm. The usually calm Baltic had raged for a day and a night, trees were torn out of the cliffs, and firefighters in the state of Mecklenburg Vorpommern had been called out two hundred times.

Next morning, the coast looked pure and innocent, the sand beaches, white rock, and grey sea as unruffled as two hundred years ago when Friedrich had painted his view of the chalk cliffs, jagged as canines, snapping at the inverted blue triangle of water, while three deranged travellers tottered, elegantly, on the lips of the maw.

The only signs that violence had been committed were the wounds left in the cliff face, and the broken limbs of trees. The sea whispered indifferently. We took photographs.

One day, a few weeks after our trip, I caught up with myself, nine months into my term, time to have a baby instead of bearing sorrow like a malignant tumour.

You reach a time when you realize you’ve stopped falling in the chasm and you should drag yourself up to peer over the edge for everyone else’s sake, if not your own.

Even the dreams have quietened down. There was one last night that took me somewhere new, not into the turbulent darkness of a bottomless well, or boxed up in a suffocating, windowless room, but outside into the sunlight of a boundless landscape.

I was looking for her; I’d lost her. In my dreams I was always losing her. It was my fault. We were supposed to be doing a roleplay job together as simulated patients in a hospital, and she’d gone missing. It was unlike her to miss a job.

She must have left the building to go out for a walk, and I panicked because she was supposed to be under medical supervision, though she did not know, or at least admit to me, how ill she was, and I would have died rather than let her find out.

After a frantic search through dressing rooms rigged in crowded corridors and on staircases blocked by actors putting on their makeup, and, on landings further down, by wounded soldiers being evacuated in the middle of a war. They were real soldiers, not actors, or, if they were, very good actors, because of the pain in their eyes as they shared jokes and smoked their cigarettes.

I ran until I reached the auditorium of a shabby Victorian theatre, dusty and ashen with disuse. It was a cavernous husk, where no human voice would speak again, so I knew she would not be there.

I ran to the first exit I could find, and opened a door expecting to see the concrete paths and dejected trees of the hospital grounds. They weren’t there. The world had shifted on its axis. In front of me was Richmond Park, on a bright summer’s day, packed with people having picnics under a cloudless blue sky.