“Though the world is so full of a number things,
I know we should all be as happy as….”
from ‘Make ’em Laugh’ sung by Donald O’Connor, Singin’ in the Rain, 1952, music by Brown, lyrics by Freed, indebted to Cole Porter’s ‘Be a Clown’, sung by Judy Garland and Gene Kelly, in The Pirate, 1948

One of the saddest and most repeated histories in the world is of the child who knows they are not as great as the parent they spend their life trying to emulate. 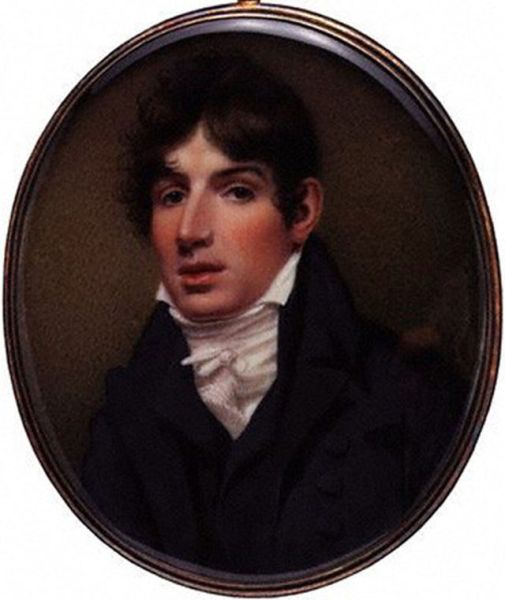 Hero with a fatal flaw: the tragically bad actor Henry Siddons (1774 – 1815), eldest son of the great tragic actress, Sarah Siddons, by Samuel John Stump, watercolour portrait miniature, 1808. “He is a fine, honorable, but alas! melancholy character. He is not well indeed…”* His anxiety and lack of self-confidence are apparent, even painted on a piece of card 79mm x 64mm. (NPG) Image source: Wikipedia

They are the collateral damage of celebrity, or genius, or romance, compelled to follow the same vocation as their mother or father, deaf to other callings, dazzled by star dust, enthused with idealism, often determined to work hard, unable to shine, unable to be happy.

The falling-off is steepest in public or artistic careers, and is not confined to celebrity families. The freeloading brats of celebrities raised by nepotism in any industry, political, business or entertainment, get all the press, but there are noble failures, who feel much and barely leave a mark.

Fame and talent are not indivisible. Children of unlucky actors are just as likely to be inspired to go into the same profession as children of rich and famous ones. It’s not a career choice, it’s an hereditary gift or curse; they are not sure which until there is no going back. Sometimes they have talent and ability, but not the temperament to withstand the slings and arrows of their vocation.

Of all the members of the Kemble dynasty of Shakespearean tragedians, the most tragic is Sarah Siddons’ eldest son, Henry, because he inherited all her passion for performance and her intellect for analysing character, without her talent and resilience.

All he had ever wanted to be was an actor, and he was entirely unsuited for an actor’s life. He was perfectionist, and acutely, even morbidly, sensitive to rejection and criticism. The family was fully aware that he suffered from excessive anxiety. His mother worried about his “melancholy character.” END_OF_DOCUMENT_TOKEN_TO_BE_REPLACED