I was thinking all night of the post I’d write about a clock, an 18th century clock. It started with the clock, anyway, and ended up being more about a mother and daughter.

It was going to be a post about self-isolation and self-improvement, about reason and tolerance defeating ignorance and greed, about women’s fight for equality and independence; about jealousy and love, egos and guillotines; about rebellion and restraint; about philosophy, education and religion; about gaiety, satire and burlesque – lyrics from Gypsy were going to be included (“Sing out, Louise”) – it was a mess, less than the sum of its parts.

The object still exists for you to look at. All you need from me is a link. No words. Everything has been said before. No more blogging, I say.

Instead, I’m copying and pasting a Tweet from the journalist John Crace, about today’s cause célèbre, the latest gobsmacking hypocrisy of the Vote Leave coup leaders who are turning the ancient democracy of Great Britain into a shoddy dictatorship, a tax haven for corrupt, nihilist capitalists, while the rest of us, if we survive the plague, will die from poverty and bitterness, and malnutrition from lowered food standards.

We will be deprived of freedom of movement to work and live and love where we want in Europe, our continent. For some of us, that freedom and that love are the meaning of life itself. We have been dispossessed. We are aliens in our own country.

The rich will still be able to do what they want, just as Cummings, Great Britain’s eminence grise, did during lockdown, when, knowing he and his wife had COVID-19, he flouted government restrictions by travelling 260 miles to visit his elderly parents with his four year-old child.

Cummings, in his own mind the child of Machiavelli and Nietzsche, doesn’t care; the pastiche prime minister/world king manqué and his equally over-entitled, even creepier associates (who can’t wait to stab him in the back) don’t care; they know there will be no consequences for the shameless. They are unaccountable. They have called democracy’s bluff.

They prey on human frailty. They play on the ordinary person being as selfish and venal as they are. They taunt and tempt like the sleazy admen and dodgy goods’ salesmen they are.

Everything they offer you has fallen off the back of a lorry. They know most of us know. They don’t care. Look how we can spin! Aren’t we funny! More entertaining than the Opposition. Razzamatazz! (Theatre is dead, due to Coronavirus, showing off isn’t.) Bragging how you have twisted the truth impresses more, nowadays, than telling the truth.

If you weren’t as bad as them before, you will be soon.

According to @michaelgove
and other cabinet ministers,
those of us who didn’t break government guidelines
to drive 250 miles just didn’t love
our families and friends enough

Another Tweet, from Aditya Chakrabortty, sums up the depth of this government’s betrayal of a nation:

And, because I can’t bear to leave you without something old and pretty, here’s the link to a relic from the Age of Enlightenment and Reason, a neoclassical feminist clock illustrating the power of solitude:

“One must work with time and not against it.”
Ursula K. Le Guin, The Dispossessed 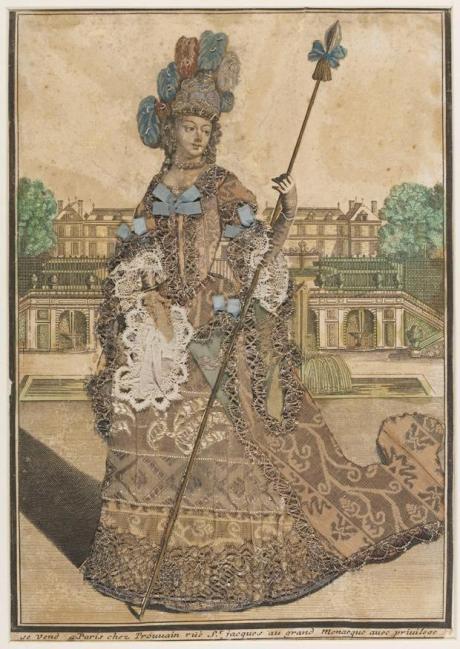 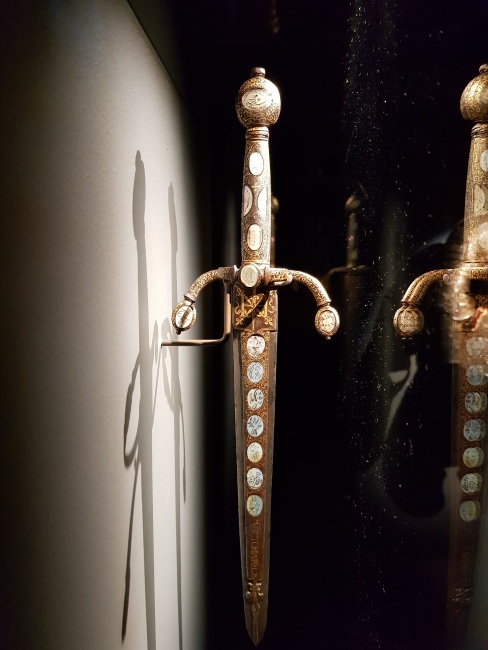 Dagger of Henry IV of France c. 1599 on permanent display at The Wallace Collection and one of the ancient global artifacts displayed in Sir Richard Wallace: The Collector, gleaming in an atmospheric new exhibition space which is like a sacred temple of riches, just off tacky Oxford Street. Entry is free, because Sir Richard wasn’t just a rich collector in the Imperial British tradition, or schmoozing art dealer eyeing his chance, he was a cosmopolitan Europhile philanthropist, whose legacy was bequeathed to the nation by his French wife. Photo © Martin Hübscher Photography

Running the Gauntlet of the Arts London, 2018

Functional objects, vessels for light and fragrance, tables, clocks and other household accessories for the rich and powerful, gilt bronze status symbols that are also neoclassical sculptures of the finest art, piercing the soft darkness with their golden fluidity, making your jaded heart sing – I never understood ormolu before I saw The Wallace Collection’s current exhibition Gilded Interiors: French Masterpieces of Gilt bronze.

And, in The Wallace Collection’s tradition for 117 years, entry to temporary exhibitions as well as to the permanent galleries is and always will be free. Liberty, Egality, Fraternity still exist in an Anglo-French union in Manchester Square,  London W1.

It is a small exhibition, the pieces liberated by the curator from glass cases and cluttered rooms, out of the crude glare of museum electric lighting into simulated candlelight. The atmosphere is seductive. It is a tiny piece of gilded theatre. END_OF_DOCUMENT_TOKEN_TO_BE_REPLACED

“The more I see of Mankind, the more I prefer my dog.” Pascal 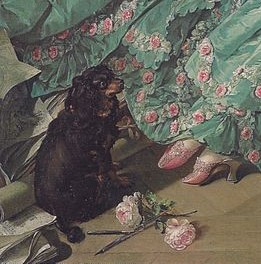 Detail of Drouais’ 1763-64 portrait, the last one made of her, completed after her death from cancer, and heartbreaking because the most famous mistress of 18th century taste is so prematurely aged and dumpy. She is determined to smile and say “I’m still here”, and welcome the visitor into her private apartment. The fabric of the dress she wears, and the surrounding furnishings, are stupendous. This isn’t vanity, it’s public relations, and apologia. This is what I believe in, she says. This is what I leave you. I am childless, people are faithless, but the beauty of artifacts, and the love of dogs, are joys for ever.

“The more I see of Mankind, the more I prefer my dog.” Pascal

or, The Power of Pink: She’s a Girl, get over it

So here, at last, it couldn’t be resisted, the most familiar and most delectable of all the images of Madame de Pompadour that enchanted my childhood is posted here for DvP, like everything else that matters in life.

It is not just the story of a dress, though what a dress, which can transform a woman into a rose, it is the story of the balance of feminine power between personal ambition and love for another person. She sacrificed peace of mind for ambition, and then fell in love, first with a king, then a man, then a country, and finally a civilization which she made universal.

Notorious as the quintessential courtesan, sneered at by the court for being bourgeois, called “putain” by the king’s sour doughball of a son, reviled by the public, viewed ambivalently today as a well-dressed figurehead of a rotting totalitarian system, there was nothing vulgar, tarty or heartless about her. The illegitimate daughter of a financier showed the world how a cultural leader and benevolent queen should behave.

She was not a parasite; she graced the ancien regime, she gave it lustre and refinement, and it is to Louis XV’s credit that he recognized her contribution to French culture, beyond her private services to him. She transcended the official position of royal mistress through her own accomplishments and charm, of which sex was the smallest part.

If you examine her portrait closely, with the same forensic intensity we study photo-shopped celebrities for flaws today, you might be thinking, by this time, 1758, she was in her late thirties, her looks deteriorated prematurely by anxiety, poor health and rich food, she wanted to hide her ageing neck and chin with that chic ruffle round her neck, then, yes, you are right, of course she did, and let her alone, for heavens’ sake; she lived to please; one person’s vanity is beauty’s gift of happiness to everyone with eyes to see, and shame to you who evil thinks.

She lived beautifully, and showed the rest of us how to do it, too. She united femininity with power, without concessions to coarseness or snobbery. She was a talented actress who knew how to put on a good show with complete sincerity. That is not a contradiction; good acting is about unpeeling layers to the truth underneath, however you are feeling. No-one has ever achieved and exercised power in quite the way she did, in such elegant style, on such a grand scale, and being nice to everyone along the way.

She is leaning on Pigalle’s statue of ‘L’Amour embrassant l’Amitié’, Love embracing Friendship, which she had commissioned in 1754 to aggrandize her new relationship with the king. They agreed they would not sleep with each other more, but that she would keep her job, because Versailles and French civilization were better with her, and he needed her, he couldn’t rule or live without her, and promiscuous lover though he was, he would be the most faithful of friends.

A lot of us can’t live without her, either. She’s one of the most enduring and likeable of icons, a woman for all seasons. We love her for the beautiful display, and the vulnerability.

“It is the time you have wasted for your rose that makes your rose so important.”
Antoine de Saint-Exupery, The Little Prince