A dress recovered from a 400 year old shipwreck reveals secrets of the Stuart court on the eve of the Civil War. (Source: The Guardian)

Unknown woman in masque costume, miniature by Isaac Oliver, 1609. Image: Wikipedia
In the Masque of Queens, everybody finds out that they are taking part in an illusion, and carry on regardless. They are all lying by the end.
Say to the court, it glows
And shines like rotten wood
(From ‘The Lie’, attributed to Sir Walter Ralegh)

A Story of Guile at the Stuart Court

Betrayed Queen No 1: Anne of Denmark, wife of James VI of Scotland and I of England, by Paul van Somer, 1617. Image: Wikipedia.
She is shown wearing a fashionable riding habit, accompanied by her greyhounds, standing in front of Oatlands Palace, for which she had ordered Inigo Jones to build a new ornamental gateway. Jones’ beautiful Queen’s House at Greenwich was built for her, but was uncompleted at the time she died in 1619.

Anne was a cultured woman in a difficult marriage to a gay, frequently drunk, pedant. She enjoyed hunting and dancing. Her patronage of the arts, especially court masque and neoclassical architecture, added lustre and prestige to the disreputable, faction-ridden Jacobean court that lurched from plot to counter-plot while James deluded himself that a king with bishops could keep the balance of power.

She was lucky that Inigo Jones, an architect and designer of genius, was at hand to make her dream houses real and make theatre sets like dreams. She suffered depression and bad health for the last seven years of her life after the catacylismic death of her eldest son, Prince Henry in 1612.

Design for a masque costume for Prince Henry in Oberon, the Faery Prince, 1611, by Inigo Jones.
Lost Prince: one of the might-have-beens of history, Charles I’s elder brother, the precocious, athletic and staunchly Protestant, Henry Frederick Stuart, who died of typhoid aged eighteen. Among other manly virtues, he understood the propaganda value of masque.

Anne might have been a secret Catholic, like her grandson Charles II (the most disillusioned and guileful of all the Stuarts and their courtiers) at a time when the political majority supported a Protestant succession to protect vested interests in the name of national security.

One of the ladies-in-waiting who accompanied the queen from Scotland to England in 1603, was Jean Ker, Countess of Roxburghe who became a spy for the Spanish government. Anne knew she could not be trusted, and managed to dismiss her in 1617.

Betrayed Queen No 2: Henrietta Maria of France, wife and “Dear Heart” of Charles I, who was lucky enough to be painted by Van Dyck, the greatest propagandist the British Royal Family have ever had.
Oil painting, c. 1636 – 38. Image: Wikipedia

Van Dyck in his portraits and Inigo Jones in his theatrical designs transformed Henrietta Maria into a fairy tale queen of sweet dignity peeping out from billowing clouds of coloured silk.

Henrietta Maria, like her mother-in-law and husband, had a genuine enthusiasm for the arts. Like Anne, she enjoyed performing an active part in court masques.

Unlike Anne, she was also politically active and one of her husbands’s most influential advisers. He became increasingly dependent on her after the death of the Duke of Buckingham. Her devout Roman Catholicism aroused suspicion and unpopularity in the country during rising tensions between King and Parliament.

In February, 1642, she travelled to the Netherlands, ostensibly to reunite her nine year old daughter Mary with the princess’s husband, the Prince of Orange, when some of the ships in her fleet were wrecked by storms off the Dutch coast, and her ladies in waiting lost their wardrobes in the North Sea.

Of far more concern to the queen, the crown jewels and plate, which she had brought with her in the hope of selling to raise money for the royalist cause, were safe and dry.

Prominent in the royal entourage was Princess Mary’s governess, the Countess of Roxburghe. 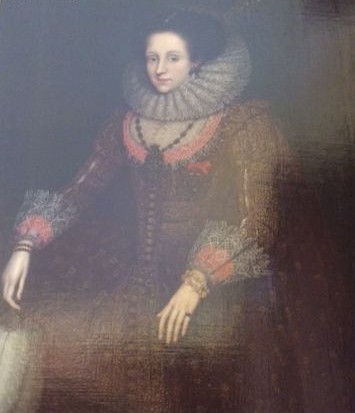 Betrayer: Jean Ker, Countess of Roxburghe, (c 1585 – 1643) lady-in-waiting to Queens Anne and Henrietta Maria successively, governess to three of the royal children, and spy for the Spanish government. Image: Adel in Nederland.

The activities of the dark lady were well known to the Jacobean and Caroline courts, where everyone was so used to spies, as one of the collateral evils hedging the king, that they just played along, feeding information when it suited them.

Lady Roxburghe had lost her position as Mistress of the Robes at Anne of Denmark’s court but was brought back into favour by Charles I, who appointed her governess to Princess Mary in 1631, and consequently to two of his younger children, a sign of his strong sympathy towards the Catholic faith.

She accompanied the princess to Holland in February 1642. Her luxurious silk dress was one of the losses in the shipwreck of the royal fleet off the Dutch island of Texel.

Kept close to the heart of the royal family as she was, it is hard to know who was spying on whom.

In the Masque of Queens, everybody finds out eventually that they are taking part in an illusion.

Dynastic Pawns: Princess Mary, eldest daughter of Charles I, and her husband Willem II, Prince of Orange, in one of Van Dyck’s most poignant portraits, painted in 1641 when the children (she was nine; he was fifteen) were formally married in London.
Image: Wikipedia

Thirty-six years later, during the Restoration, their only child, Willem III of Orange, married his cousin Mary Stuart, and they eventually succeeded to the English throne in the Protestant coup d’etat of 1688 as William III and Mary II.

The Stuart Masque was over. END_OF_DOCUMENT_TOKEN_TO_BE_REPLACED