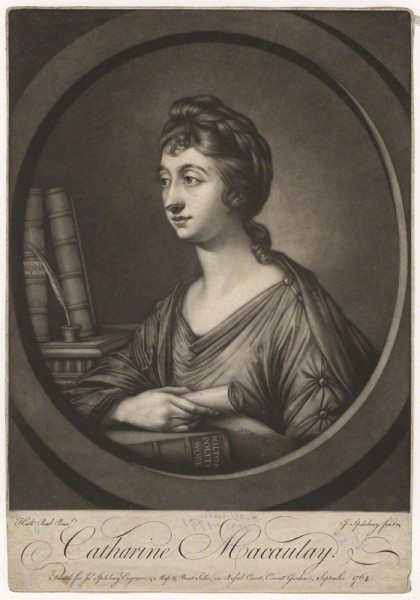 Catharine Macaulay (née Sawbridge) mezzotint by Jonathan Spilsbury, published by John Spilsbury, after a painting by Katharine Read, published September 1764. © National Portrait Gallery, London.
The great political tradition of constitutional liberty that inspired Macaulay is contained in the books surrounding her. She leans on John Milton, the finest republican poet and polemicist in the English language; behind her are the Discourses concerning Government of Algernon Sydney, the first Whig martyr, executed in 1683 for his opposition to Stuart absolutism and all forms of government oppression.

The painter of the original portrait reproduced in this engraving was Katherine Read (1723 – 1778), a Scottish artist specialising in crayon who had a successful practice in London. Her well-connected, wealthy clients were mostly women and children, members of the royal family and aristocracy, prominent intellectuals and writers like Catharine Macaulay, and society beauties.

Read didn’t need to work for a living; she chose to. She was independent and ambitious; she never married. Her early career was dictated by the politics of her time. Her family had strong Jacobite affiliations, for which they suffered, and she left Scotland for France after the defeat of the ’45 Rebellion. She was able to afford to study crayon painting in Paris under Maurice Quentin de la Tour.

Then she moved to Rome, another Jacobite hub on the cultural Grand Tour, studying and making contacts with patrons in Italy, until she settled in Hanoverian London in 1753, earning money from painting the old enemy.

George, Prince of Wales and his younger brother, Frederick, Duke of York, mezzotint by James Watson, after Katharine Read’s crayon painting, circa 1765-1770. Image: © National Portrait Gallery, London.
Read produced many charming portraits of aristocratic children, made cuter by hugging dogs, big or small. There is nothing charming or cute about these two alarmingly overweight toddlers, the future George IV and one of his brothers, suggesting that Read refused to sacrifice truth for sychophancy. Perhaps she never gave up her Jacobite contempt for the Hanoverian dynasty.

In 1771, seeing another opportunity to conquer a new world, or just taken over by Wanderlust again, she accompanied her niece, Helena Beatson, also an artist, to the developing British empire in India, and died at sea, near Madras, at the beginning of her journey home.

Read’s art was tame compared to the great female portrait painters who flourished in France later in the century, due to superior professional conditions of access to the same high training as men at a progressive academy, and of positive discrimination rather than condescension of patrons, but the sketchy facts about her life give an impression of a strong, adventurous, determined woman, a brilliant trimmer and survivor, who adapted to circumstances and contemporary taste.

She knew what she wanted to be, and she did it.

The graceful leaning poses of her sitters, her refined tact in rendering gentle and genteel likenesses, the subtlety of her pastel colours, were fully appreciated in her lifetime, but after her death, sharing the posthumous fate of many talented women artists, rich and poor, the best of her work was so good it was attributed to men, in her case Joshua Reynolds, and the rest of it almost entirely forgotten. 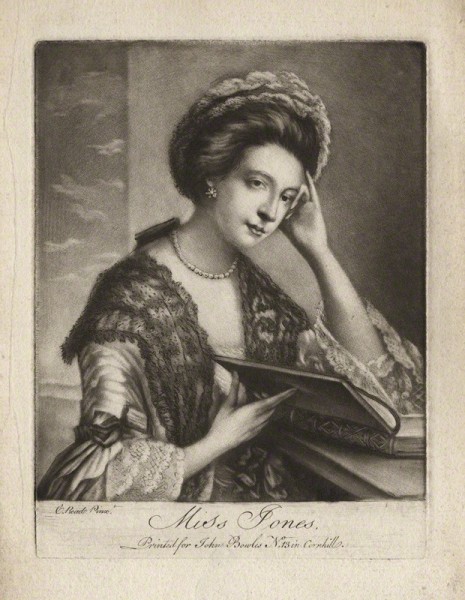 or The Moral Dangers to Young Women of Reading

Depending on what you want from a book, you might say “I’ll have what she’s having” and sales of the book would exceed Fifty Shades of Grey and Harry Potter combined.
Bernard d’Agesci Lady Reading the Letters of Heloise and Abélard
c.1780 Oil on canvas, Art Institute, Chicago. Image source: WGA

In the age of Enlightenment and Sensibility, women were encouraged to read moral novels for self-improvement, and discouraged to read anything politically or sexually exciting, so of course they did, with an all-consuming passion.

So, as is the way of the world, portraits of girls reading became a popular soft-porn genre for men, sometimes unconvincingly disguised as moral warnings.

Moralists and misogynists could berate as much as they liked, but it was in no-one’s interests to stop women reading novels, either for instruction or diversion.

For all sorts of reasons, many people of both sexes were afraid of independent thinking, erudite women, like the Bluestockings, so they laughed at them, the premise of the jokes being that having more sex or children would set them right.

There were exceptions, women whose learning and writing was of so high a quality or relevance that it transcended gender prejudice. No sensible man could deny that these female authors were rational creatures.

Catharine Macaulay, by Robert Edge Pine, oil on canvas, circa 1775 © National Portrait Gallery, London
Historian, political writer and activist, republican supporter of American Independence, opponent of inequalities in wealth, and proponent of co-education, linked to the ‘Bluestocking’ group of intellectuals, she explained she had been “a thoughtless girl till she was twenty, at which time she contracted a taste for books and knowledge…” She lost the respect of her contemporaries not for any flaw in her intellectual system, but because when she was forty-seven she married a man twenty-six years younger than her.

At the same time as women declared their intellectual and moral equality there was a huge increase in light literature. In the new enlightened culture, men and women both believed in the importance of educating girls, if only for the amelioration of the male condition, and this could be best achieved through presenting complex or lofty ideas in an entertainingly accessible way. END_OF_DOCUMENT_TOKEN_TO_BE_REPLACED

Mrs Siddons as The Tragic Muse, Melpomene, with the figures of Pity and Terror behind her, by Sir Joshua Reynolds, oil on canvas, 1784. Huntington Art Gallery, San Marino, California. Image: Wikipedia

After her formal retirement from the stage, Mrs Siddons gave readings from Shakespeare at soirées given in her home, at which her daughter Cecilia acted as a fierce usher, making sure the audience behaved, and reassuring her mother that her powers were intact.

Rustling, coughing, munching, and the bathetic sounds of mobile phones, are distracting enough in a large theatre nowadays, but it is even harder to maintain dramatic illusion in small domestic settings, lit by oil lamps and candles, where refreshments are being served on a table in the interval.

Once, the suave portrait painter Thomas Lawrence, summoned back to the reading sooner than expected, suffered the embarrassment of having to finish eating a slice of toast as inaudibly as possible while the Tragic Muse resumed her platform performance.

Despite such incidents, the readings were not ridiculous; somehow, Mrs Siddons made them sublime. They inaugurated the Victorian popularity of public readings later in the century, most famously the ones by her niece Fanny Kemble (reputedly better at impersonating male characters than her father Charles) and Charles Dickens, part of a dubious dramatic tradition that still thrives in one-woman/man shows, book readings on radio and celebrity promotional tours of today.

Mrs Siddons was able to do more hold her audience; she transported them to a different plane of apprehension. Maria Edgworth, listening to Mrs Siddons as Queen Catherine felt she “had never before fully understood or sufficiently admired Shakespeare, or known the full powers of the human voice and the English language”.

She and her fellow guests were so rapt that they forgot to applaud; their “perfect illusion” was “interrupted by a hint from her daughter or niece, I forget which, that Mrs Siddons would be encouraged by having some demonstration given of our feelings”.

The crash landing of her willing disbelief made Maria Edgworth feel let down by actorly vanity. Audiences wanted Mrs Siddons to be above mortal needs. A great actor has godlike powers on stage to alter audiences’ states of mind, but only a stupid actor thinks they are a god. The gap between the power of acting and the personal vulnerability of the actor is as unbridgeable as the distinction between the reigning sovereign and their private person, completely separate entities, often, in the days of couchee and levee, occupying separate beds.

Mrs Siddons was grand, but she was not conceited. You are only as good as the performance you have just given. You cannot please everyone in the audience. There is always someone unmoved, someone else unpicking you, someone else disappointed that you are fatter and not as good as you were twenty years ago. The emotional effects for which you are famous might flop any day. She had made herself a great actress through patient application and subjective observation, not divine inspiration.
END_OF_DOCUMENT_TOKEN_TO_BE_REPLACED

She had gone from goddess to joke. END_OF_DOCUMENT_TOKEN_TO_BE_REPLACED