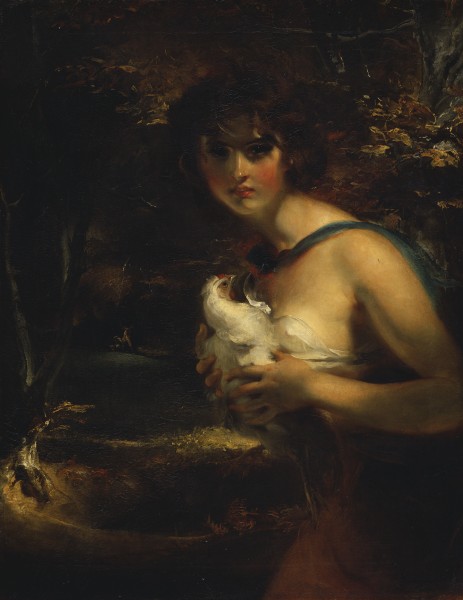 The Gipsy Girl by Thomas Lawrence, oil on canvas, 1794
© Royal Academy of Arts, London
A disturbing piece of erotica by Lawrence, for which Maria Siddons, aged fifteen, has been suggested as the model. It is a plausible theory: the girl has the intense, dark-eyed and tousle-haired look of the Siddons family. If it is not Maria, it is representative of a physical type which fascinated Lawrence.

The RA website notes that the genre to which the picture belongs in art history is “fancy”, a sentimental objectification of rural life for rich people, but this wild, half-naked boyish girl with her flushed cheeks, parted lips and fierce gaze – “the frightful sort of beauty” that pierced her mother when she looked at her daughters – is inviting a far more sexually ambivalent response, such as what on earth Lawrence really wanted out of the Siddons sisters, let alone what she is doing with that chicken pressed to her bosom.

At the beginning of Lawrence’s invasion of their peace, as Sally described it, Mrs Siddons was too blinded by her own affection for him to see the whirlpool into which he was pulling them; perhaps, unconsciously, she was enjoying one of the undercurrents too much, that his feelings were flowing towards her, not her daughters.

The fact so clear to us, that Lawrence was protesting his feelings for Sally too much because he was basically gay, explains but does not excuse his emotional abuse of the two sisters. It was probably just as apparent to Mrs Siddons, who was, after all, in the theatrical profession and not stupid. Eighteenth century and Regency perceptions of sexuality were more fluid than ours, even while the laws governing behaviour were barbarously repressive.

You were not defined in enlightened artistic and aristocratic circles by the sex of whom you slept with, so long as you didn’t make a scandal, or annoy the wrong people, who would use the law vindictively against you, as the “foul thing”, Lord Queensberry, did to Oscar Wilde in 1895. It is no wonder that the pressure of confused feelings and double lives, and often blackmail, drove so many to suicide.

Lawrence, as a self-made professional society portrait painter, dependent on respectable fee-paying clients for his livelihood, could not take the same risks as the aristocratic bisexual Lord Byron a generation later, and flee abroad to countries where the Napoleonic Penal Code had decriminalized homosexuality.

Intelligent women continued to fall in love with Lawrence for the rest of his life, just as they have loved and married sensitive, handsome gay men since. He made women look good and feel good about themselves. Like a lot of narcissistic people, he was probably a very skilled lover: he made love to women the way he would have liked to have been loved if he was a woman.

Like Byron, he used his sex-appeal to further his career. Sittings with Lawrence felt like seductions; sometimes they were seductions.

Marriage was the predominant career option for women without independent means, but the ones who could afford to love and live with each other openly were left relatively free of salacious and legal interference. Queen Charlotte got the Ladies of Llangollen a pension, which would never have been granted a male couple living together, because the concept of lesbianism as a sexual preference did not exist – while women who married conventionally lost their individual rights to their husbands. Defiance meant risking subsistence, reputation, children.

In 1849, Sarah Siddons’ niece, the actress, abolitionist and feminist Fanny Kemble, was one of the first women to challenge the divorce laws of the United States, but she still had to suffer the loss of custody of her daughters to her slave-owning, philandering husband. 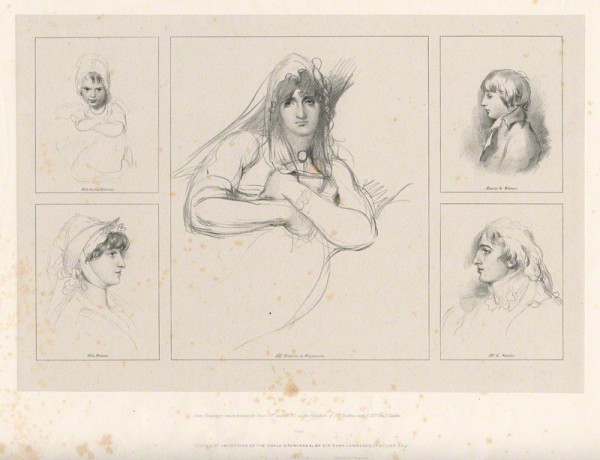 Sarah Siddons and members of her family by Richard James Lane, published by Joseph Dickinson, after Sir Thomas Lawrence, lithograph, published May 1830  © National Portrait Gallery, London.
The print has Lawrence’s sketch of Mrs Siddons as Sigismunda at its centre, a figure of brooding intensity with three of her children and one of her younger brothers revolving like satellites around her.
Clockwise: Cecilia Combe (née Siddons); Sarah Siddons (née Kemble); Sally Siddons (identified sometimes as Maria); George John Siddons; Charles Kemble (the actor)

Mrs Siddons had had a soft spot for Lawrence since their first meeting in Bath when he was a pretty nine year old boy earning a living as a portrait painter and she was establishing her reputation as a leading actress.

At the time he ruptured her daughters’ lives, Mrs Siddons was in her early forties, still slim and splendidly handsome, she was the most famous actress in the country, a conscientious, hard-working mother who needed assurance that she could still be loved as a woman, not just a national monument.

Theirs was never a sexually consummated affair; it was more of a self-dramatization for the suppressed bisexual, celebrity-obsessed Lawrence to fulfill an impossible dream of union with the famous and irreproachably virtuous mother-goddess Mrs Siddons.

Lawrence was fourteen years younger than Mrs Siddons, only five years older than her eldest son, and ten years older than Maria, a lusciously pretty, frivolous sixteen year old when he first switched his attentions to her from her older sister, Sally, who was deeply in love with him.

Both girls shared the intense dark-eyed good looks and striking features of their mother in softer, prettier versions; they were mini-Sarah Siddonses. It was hard for the impulsive suitor to make up his mind.

Mr Siddons, the girls’ father, didn’t want Lawrence, an artist encumbered with debt, as a son-in-law. A generational pattern was being repeated: Sarah Kemble had been a headstrong sixteen year old when she got engaged against her father’s wishes to William Siddons, an actor eleven years older than her in Roger Kemble’s touring company.

Roger Kemble had separated the lovers by dismissing both of them, sending his daughter, despite her obvious talent, into service as a maid. The plan failed, because the determined couple married two years later, with the blessing of Sarah’s employer Lady Mary, only too happy to play fairy-godmother in a Romance of the Theatre.

So Mrs Siddons joined forces with her younger daughter Maria to overcome Mr Siddons’ opposition to an engagement until they wore him down with exhortations, her own falling into iambic pentameters, to allow true love to prevail. He looks tired in Opie’s portrait.

Soon after the engagement was formalized, there was an unwitnessed scene between Lawrence and Mrs Siddons in which he told her he had made a mistake. He wanted to marry Sally, not Maria. For a second time, he jilted one of Mrs Siddons’ daughters.

Their mother was always inclined to over-indulge Lawrence’s vagaries; after all, she understood the play of passions in an artistic temperament. She was well-read in Rousseau and contemporary philosophy on the importance of emotional spontaneity. Lawrence seemed to represent the modern spirit, and a new kind of sensitive man.

After a brief summer of reconciled love, Sally broke off with Lawrence when it became impossible to deny that Maria was dying of consumption. The sensitive man could not bear to come second to anyone. He tormented the grieving family with threats to kill himself unless Sally married him.

Sally was completely disillusioned about him, which did not stop her being in love with him.

Even Mrs Siddons thought he had gone over the top. Her most distinctive attribute as an actress was her ability to convey conflicting emotions in the same moment. She saw through him. She openly condemned his unstable character; she saw that his passion sprang more from pique at being rejected, and financial anxiety, rather than an elevated feeling for her eldest daughter.

Within a few months she admitted that he was a flirt, gone back to his “old sport of ogling and sighing at the Theatre”. They met socially. She was still, clearly, fascinated by him; she missed his attention; she missed the quickening of her pulse.

Lawrence proved that drama could exist in real life. He heightened reality, he improved on it; she was too good an artist herself not to acknowledge it.

Despite all the suffering he had caused her daughters she could never bring herself to break with him. The rapport was too strong. She absolved him, as if believing that all passions, even their biggest mistakes, are justified by grandeur alone.

Mrs Siddons and Lawrence resumed their friendship which lasted all their lives; shortly after Sally’s death; she sat for another portrait and he attended her soirees and recitations. In old age, she said she wanted Lawrence to be a pallbearer at her funeral. He let her down by dying before he could play his part in the last scene of their tragedy.

9 comments on “In this world and the next: a tragedy of gender and celebrity”